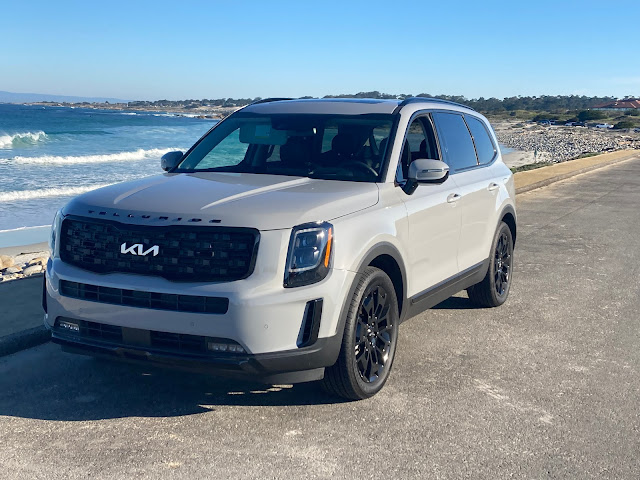 Telluride. What's it evoke for you? A former Victorian gold mining town in the Colorado Rockies and now a ski resort? For me it's a Nitty Gritty Dirt Band song of the same name, a song that makes me smile and feel warm inside. 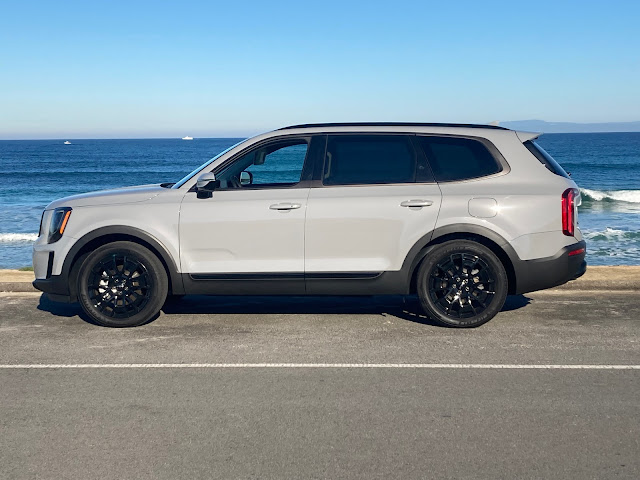 Telluride seems like a perfect name for an SUV. It ranks right up there with Explorer and Tahoe.

I have driven two Tellurides before and really liked them. My opinion hasn't changed - The Telluride is a very nice SUV.

To give you an idea of the size of the Telluride it's easiest to just compare it to some of its better known competitors. It is about the same size as a Honda Pilot or Ford Explorer.

There is only one engine available in the Telluride, a 3.8-liter, DOHC, all-aluminum V6 that puts out 291 hp and 262 lb.-ft. or torque. The power goes through an 8-speed automatic transmission to either just the front wheels or all four depending on how you order it. On paper there is a slight reduction in fuel economy with AWD but in reality I never saw it. The AWD is rated at 24-mpg on the highway; on a highway jaunt of 127 miles I averaged 26.7-mpg at an average speed of 63.5 mph. Overall I drove 302.7 miles and averaged an even 25-mpg; that's for highways, mountains, and around town. I'd say that is darn good.

The All-Wheel-Drive is totally unobtrusive. It's called Active On-Demand All Wheel Drive meaning it knows when you need it.

Kia doesn't scrimp with their press vehicles so it was no surprise that the Telluride I drove was a SX model, the top of the line. But that doesn't mean the base model is some bare bones vehicle with a tiny engine. Same engine, same transmission. The amenities may not be as luxurious but it's the same basic vehicle.

I do get spoiled by all the luxury. Let's face it heated and cooled seats are really, really nice. Kia seems to like the techie stuff, stuff I tend to call "nanny" controls. I turn everything on when I test a car because want to know how intrusive they are - and some can be very intrusive. I don't mind most of them but I would turn off or at least turn down the warnings. If you don't want something like Lane Keeping Assist you can turn it off. There is a part of Smart Cruise Control that automatically slow the vehicle as you enter a curve; I would definitely turn it off. It just slowed the Telluride too much in my opinion.

The SX is a 7-seater; two up front, two in the middle row, and 3 way back. Lesser models will seat 8 folks with 3 in a middle bench seat.

A lot of people who own an SUV tow, or at least they think they will someday. (How many houses have you seen with a boat and trailer sitting forlornly waiting for a trip to the lake?) FWD or AWD the Telluride will tow up to 5,000 lbs.

Cargo space is limited to 21 cubic feet behind the rear seat. That goes up to 46 cu. ft. if the rear seat is stowed, all the way to 87 cu. ft. with the middle seat(s) stowed.

I realize my friends in snow country think I live in warmth and sunshine all the time but it does get chilly where I live (chilly, not cold). So I used the heated seat and steering wheel every morning and I thought "darn they are hot!" Then it dawned on me, if you live where it is really cold you're wearing winter clothes, probably a heavy coat and gloves. I'm pretty sure the heat would soak right through a parka.

Over the course of two days I put in a fair amount of seat time and I never tired of the Telluride. I didn't drive it hard but the power was there if I needed it (0-60 mph comes up in just over 7.0 seconds, not bad for a vehicle that weighs just about 4,500 lbs. 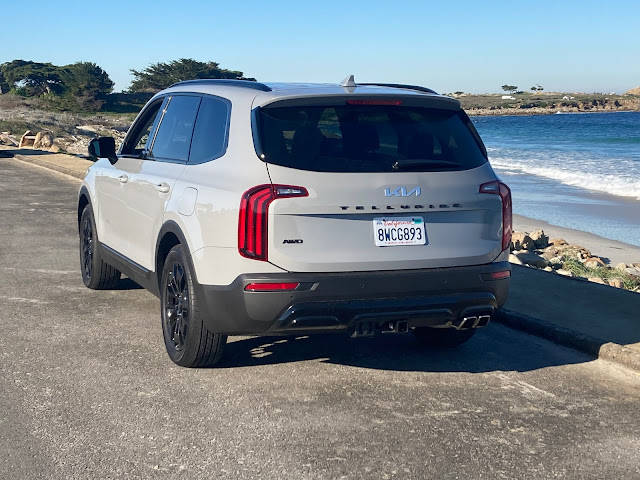 I like the Telluride. I'm not going to tell you it is the absolute best in its class but I will tell you it is a definite contender. Some reviewers may not like all the nanny tech, all the stuff to keep you on the straight and narrow. If you don't like it you can turn it off. I consider myself a good driver who is aware of what's happening around me. But every now and then I may drift a little, or someone else does something unexpected. It is nice to have those little warnings to keep me safe.

The Telluride is too big for me but I do like the oomph of the V6. If it's the right size for you check it out.