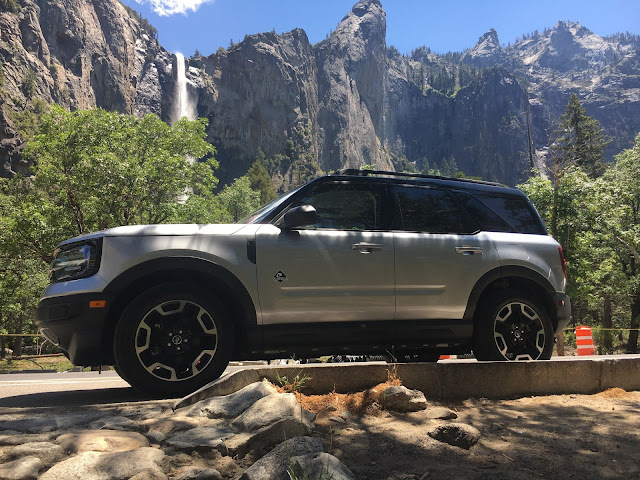 It's almost a shame that Ford unveiled the F-150 Lightening Electric Truck so soon after the new Bronco. Sometimes the public is fickle, like a dog when it sees another squirrel. But with around 125,000 orders for the Bronco I guess its place in history is safe.

Although the 2021 Bronco has more than a passing resemblance to the original it really is much different than its predecessors. The 1965 Bronco was a fairly bare-bones utility vehicle in the same vein as a Jeep CJ or International-Harvester Scout. Then in 1977 the Bronco jumped way up in both size and amenities to be based on a modified F-150 chassis and body. Then of course there was the Bronco II that was Ranger based.

But today's buyers, at least in large enough numbers, are not interested in a bare bones vehicle. And the future doesn't look good for large, gas-guzzling Utes. But what does sell? Retro that isn't retro in function and comfort (if you want that you can buy a reconstituted original Bronco for well over $100,000). Ford knew what they had to do - build a more civilized, modern Bronco but one that honored the original, and appealed to the true off-roaders. So my quest was to see if they succeeded.

Ford complicates the question by having a 'Bronco' family - 2-door, 4-door, and Bronco Sport. I drove a Bronco Sport. To me this is the 'yes you could take it off-road but ...' Bronco. Meaning it has some of the attributes of an off-roader but it's more suited to on-road use including extreme weather conditions. If you are a true off-roader you are going to opt for a 2-door or 4-door with a transfer case. The Sport in my opinion should be called a "yes you can take it off-road but be careful of the paint" vehicle. 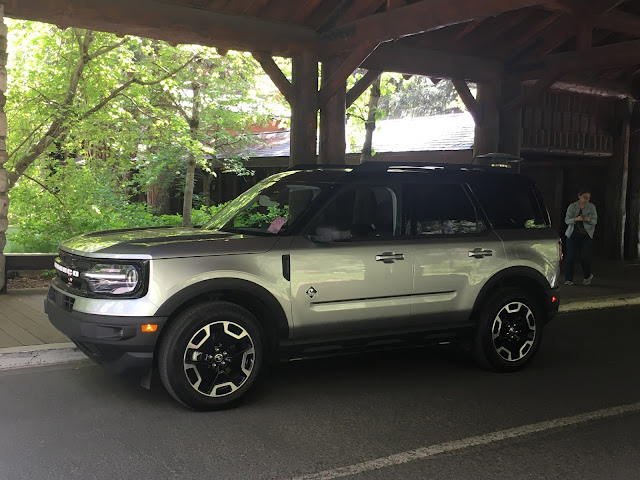 It is no secret that the Bronco is based on the Escape. That doesn't diminish the Bronco at all, heck the original Mustang was based on the lowly Falcon. Dimensions for the Bronco Sport are: wheelbase - 105.1", length - 172.5", ground clearance - 7.8" minimum, and it weighs around 3,500 lbs.

There are two engines available - the base 1.5-liter EcoBoost 3-cylinder, and a 2.0-liter EcoBoost 4-cylinder. The test Bronco Sport Outer Banks had the smaller engine. A friend asked, "Why a 3-cylinder?" My answer was, "Fuel economy." The fuel economy was excellent. We went to Yosemite in the Bronco, a round trip of 302.4 miles and averaged 33.3 mpg. That included some highway, some 2-lane, and some stop and go traffic (in Yosemite). The EPA highway mileage is listed as 28 mpg. 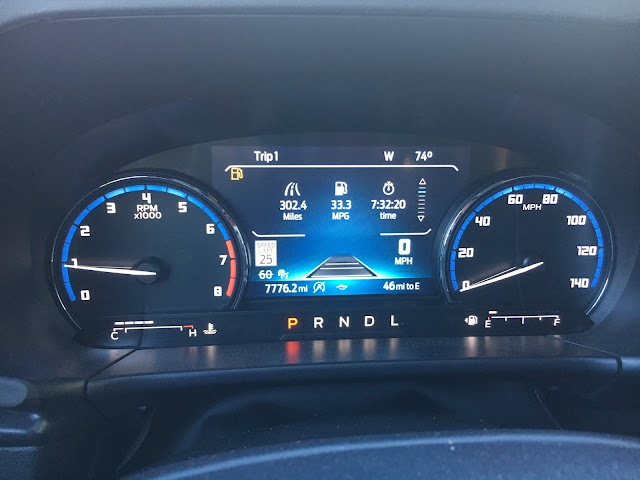 Others have found that the Bronco Sport with the 1.5-liter will get to 60 mph in 8.6 seconds. This is adequate but understandable considering the 181 hp and 190 lb-ft of torque. If I was buying one I'd opt for the 2.0-liter that puts out 250 hp and 277 lb-ft of torque. It's rated at 2 mpg less on the highway, no big deal in my opinion.

The only transmission is an 8-speed automatic. In the test Bronco there were five modes – Normal, Eco, Sport, Slippery, and Snow. The default is Normal; I preferred Sport. The gear shift is a knob that you rotate, you engage Low gear with a button in the center of the knob. Ford calls the drive system on the Bronco G.O.A.T (Goes Over Any type of Terrain).

I couldn’t find anything to complain about with the Bronco Sport Outer Banks. Just don’t expect this Bronco to be your off-road Bronco. The all-season tires should be the first clue that this not meant for the Rubicon or Moab. I hesitate to say it but this is the poseur Bronco. Given that the vast majority of 4X4s never go off-road I think Ford decided to cover their bets and sell a variety of Broncos. Many customers will buy one simply based on the look, the retro look.

A base Bronco lists at slightly more than a base Escape - $26,820 versus $24,885. With the Bronco right now you get the wow factor (the test Bronco got more than its share of looks) and more utility. When was the last time you even noticed an Escape? I’m not an off-roader, I get no joy from conquering boulders, but I do like the rugged look of the Bronco (Does this make me a poseur?).

I think with the Bronco Sport Ford has done a good job of straddling the line between every day transportation and rock climber. I am looking forward to testing an ultimate off-road Bronco 2-door in the future.