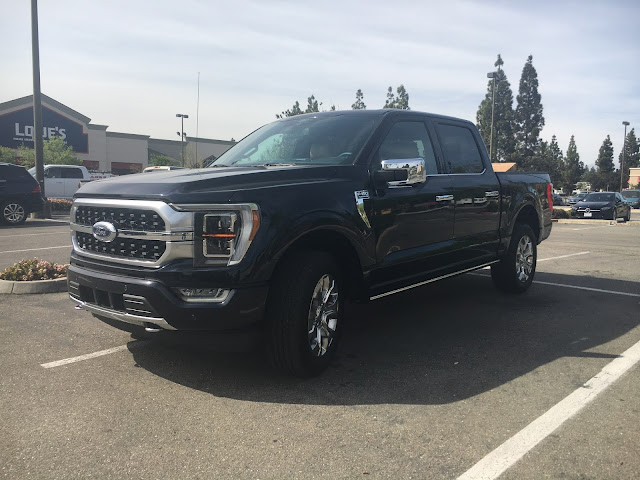 Pickup trucks are for the working class aren't they? But over years they've become more up-class. Makes sense to me because even a working stiff needs to be pampered. On the outside a truck is a truck, some versions have more chrome but it's what's in the cabin that counts and the interior of the 2021 F-150 4X4 SuperCrew Platinum is definitely luxury. I mean look at it!

Pickup trucks have not been just for work for a long time now. Every single truck maker has a luxury edition. Ford has six basic F-150 models of which three could qualify as luxury (in my opinion) - King Ranch, Platinum, and Limited.

The F-150 is the best-selling vehicle in North America. It has held that title since 1981. Ford took a huge gamble when they decided to make a V6 the standard engine. You can order a 5.0-liter V8 but the 3.5-liter EcoBoost V6 is the engine to choose in my opinion. The F-150 I drove had this engine. The folks that do instrumented testing found that a similar F-150 hit 60 mph in 5.4 seconds. This is a truck that weighs around 2.5 tons.

Like usual I didn't get a chance to test the load carrying capacity but I can attest that it handled a new shower door just fine. I was going to get a few yards of dirt but I didn't want to scratch the bed. That's the rub, it's a truck but it's too nice to use as a truck.

As you would expect the F-150 Platinum has just about everything your heart might desire and then some. I have to admit that I didn't use much of the tech stuff; I'm kind of a low tech kind of guy. But having watched some of you out there try to back up a trailer, or just parallel park I think the assists that Ford adds make sense. Ford should add a water sensor for those folks who back their truck into the lake when launching their boat (you know you've laughed at the videos).

Then there's the Pro Power Onboard that gives you a 120v outlet in the bed. Various outputs are available up to 7.2 kW (with the 3.5 Hybrid).

Ford thinks about almost everything. If you use your F-150 as your office (and with the Platinum package that is a very nice office) you can have a flat work space with the Interior Work Space (the gear shift lever folds flat at the touch of a button so you can flip the console lid over making a kind of desk).
The only down-side that I could see for all this tech is learning how to use it. Ford has digitized the Owner's Manual making it accessible through the 12-inch touch screen. I would prefer a real, hold it in my hands, paper manual. But then I guess it would be about the size of War and Peace.
I see the appeal of a truck like the F-150 4X4 SuperCrew Platinum. It gave me a feeling of invincibility especially on I580 which is clogged with big rigs. Add in the comfort and it is a place I could spend a full work day.

I have no use for four-wheel-drive and I doubt that most of you out there do either. There is a fuel economy penalty but it is minimal so go with what makes you feel good.

The test F-150 had a price of $62,230, which was about ten-grand less than I thought it would be. Seems reasonable for what you're getting.

So can you argue with success? Not really. There is absolutely nothing wrong with this truck. Obviously there are more Ford truck owners than any other single brand. And they keep coming back. If Ford screwed things up I'm willing to bet they'd lose their crown. But they haven't and I don't see that happening anytime soon.