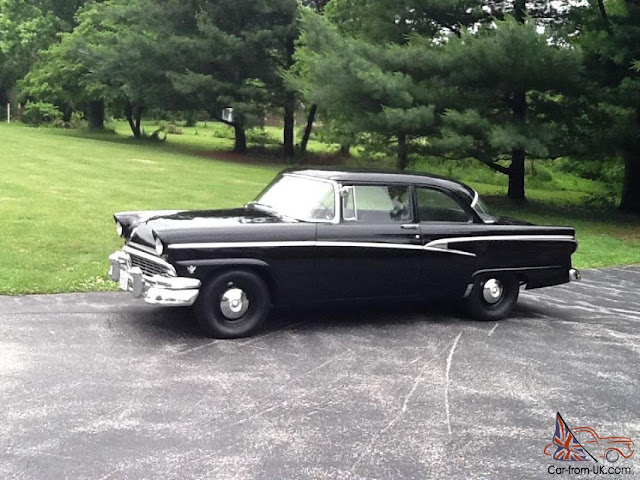 I’m a Ford guy. I like to think it’s because my dad was but I don’t really think he had a preference. He owned a couple of Packards, some Fords, and at least one Chevy.

I don’t remember where or who I bought the ‘56 from or how much it cost. It probably wasn’t very expensive. I bought a lot of cars for around $100. I most likely bought it in 1966, when I was seventeen. It was a two-door Mainline model, black with a white roof. I honestly don’t remember what engine was in it when I bought it, most likely a 292 and it was a 3-speed manual transmission. But I had plans for it. The ’56 was going to be my Magnum Opus.

I had it all laid out in my head. I had a 352 that I was building sitting in the garage, and a close-ratio Top-Loader 4-speed (brand spanking new!) that I brought from Jim’s Speed Shop in Manchester (CT). I was set.

Then someone turned me on to a postal worker in Wethersfield who was selling a ’61 Ford Police Interceptor and letting it go cheap. It had a solid lifter, 4-barrel, 390. I sold the 352, probably barely breaking even, and scraped together enough to buy the cruiser.

I wasn’t ready to get to work on the engine swap so I let a buddy (you know who you are) “borrow” the 390 so he could try it out in his ’57 Ford. Not my smartest move. We got the 390 in his car one early, chilly November night, filled the cooling system with water, got it running and called it a night. Bye-bye 390. Yup it dipped below freezing and that was the end of the 390.

Time to rethink my plan, time to search for a standard transmission FE at a decent price. There were tons of FEs in the local junk yards – 352s mainly – but none with a bellhousing and flywheel. (Why I didn’t remove the parts I needed from the 390 I don’t remember.)

Another friend, Stan, found a well-used, 332 that fit the bill at Parker Street Auto Parts, a junk yard in Manchester. Now a 332 was not my preferred engine. It was the first and worst FE. And this one was tired. But it was cheap and it was a manual transmission engine. So it was mine.

When we (and it was always we, no one worked alone on their car) finally got around to the install it went fairly easily. The FE was a bolt-in. I do remember having to dimple the firewall for clearance in one spot. The 4-speed bolted in and only required a change of the front driveshaft yoke.

I Mickey Moused the exhaust system with flex pipe (the '56 was a dual exhaust car), cut a big hole in the floor for the shifter, and Viola, I had a running, driving car!

I never did finish my Magnum Opus. It ran so I drove it. Brakes? They kind of worked. That hole in the floor? It added to the outlaw ambiance (I doubt I thought of it that way at the time).

The ’56 ran decently with the 332 although probably no better than the original Y-block. The local constabulary weren’t enamored with it, or maybe it was just me they didn’t like.

I got pulled over twice in the ’56. The first time was soon after I got it running. I hadn’t put the hood back on it yet because it was a two-man job and no one was available to help. But I wanted to drive it so I took it for a spin to the center of town. Heading down Monument Hill Road, almost to Main Street, Joey the cop pulled me over. I knew all the locals and they knew me. Joey told me I was in violation of driving without a hood. He started to thumb through his copy of the Vehicle Code so he could write me up. As he flipped through the pages I said, “Stop.” He looked at me like I’d lost my mind. I asked him to go back a couple of pages and pointed out the section he wanted. He just kind of shook his head and said, “Go put the hood on.”

The next time I got pulled over it was late at night, probably just before midnight. It was summer, hot and muggy, and Stan and I were just out cruising, windows down, listening to the radio and bull-shitting. We were heading back home, just passing Lakewood Drive on South Street, when my least favorite cop, Ballard, lit us up.

Ballard came up to my door, demanded license, registration, and insurance. I handed it all to him. He really didn’t need to see any of it; he knew who I was and that the car was properly registered. Then he asked what I was doing. I told him, “Just riding around.” He turned his flashlight on Stan and asked him what he was doing. Stan deadpanned, “Riding with him.” Ballard gave us a stern warning and let us go home.

I remember one other exciting event in the ’56. I don’t remember all the circumstances but I had the car loaded with people. The only person I remember was Kathy Costello; she was in the middle of the front seat (I remember because I had a crush on her). It was in the fall, we were somewhere near Bolton Lake. It had been raining and the road was wet and covered with leaves. As I went around a corner the ’56 began to push. I stabbed the brakes, downshifted, and sawed at the steering wheel. I hit Kathy with my elbow but avoided running off the road. Don't know if that was the reason but I never did really date Kathy.

Every now and then I see a ’56 Ford 2-door sedan and think maybe I should finish my Magnum Opus. Then I think about the Ranchero that needs my attention.

Looking back I went through a ton of cars. So many stories to tell.

None of the pictures are mine and are only representational of what I had or used.