2020 Honda Pilot Black Edition - Missed It By This Much! 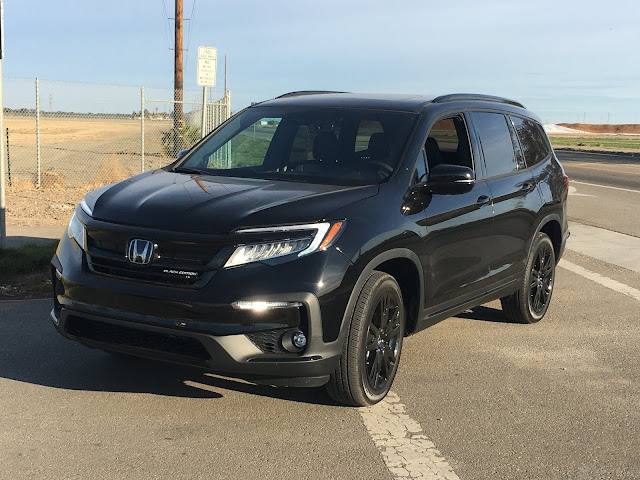 Crystal Black paint, blacked out trim, 20" black alloy rims, black leather and vinyl upholstery, and dark tinted windows, that's what makes a Black Edition Honda Pilot. It looks stunning. And for the most part it is, I mean it's a Honda so it's gotta be great right?

I have to say that way back when I owned my first Honda, a 1980 Accord hatchback, no one would have ever imagined a Honda the size of the current Pilot. Heck the '80 Accord was smaller than a current Civic! The 2020 Pilot is 196.5" long on a wheelbase of 111", not in Suburban territory but humongous for a Honda.

Under the hood is Honda's wonderful 3.5-liter V6 engine putting out 280 hp and 262 lb-ft of torque. It's super smooth and more than capable of moving the 4319 lb Pilot to 60 mph in less than seven seconds (based on tests of 2019 models with the same engine).

The four less expensive Pilots (LX, EX, EX-L, and EX-L/Nav) have a six-speed automatic transmission. The Touring, Elite, and Black Edition use a nine-speed. The Elite and Black Edition are only available with Intelligent Variable Torque Management AWD.

Honda has not lost its ability to build flawless fit and finish. I realize that the vehicles provided to the media are detailed to perfection but they are still production vehicles. It is rare to find a Honda with uneven body gaps or crooked badges. Attention to detail is important and it indicates to me that there is pride in the product.

So it baffles me why Honda, and a few other auto makers, persist in making controls that are not intuitive. Take the Pilot's gear shift buttons. For years, ever since the first automatic transmission appeared, automatic transmissions were shifted with a lever, either on the steering column or the floor (okay a few had push buttons). The beauty of that lever that either stood out or up was that it was always right there, you didn't have to look for it. 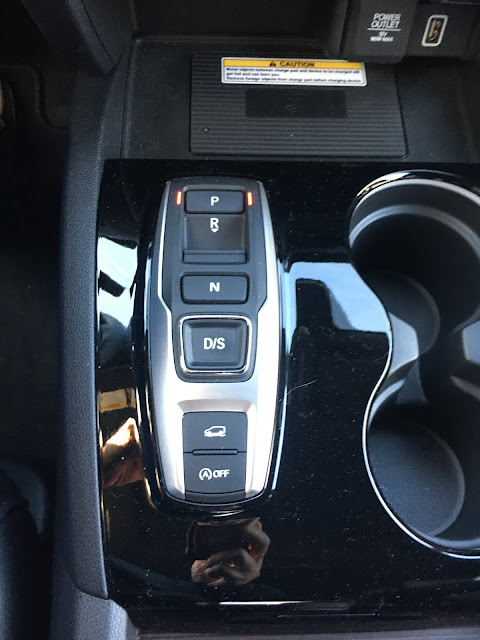 But not the Pilot's shifter. It is four push buttons on the center console (+) - Park, Reverse, Neutral, and Drive/Sport (the button with the Pilot's silhouette changes the AWD program). Four buttons isn't as confusing as some others but whenever I backed out of somewhere I had to stop, look down at the console, focus on the the D/S button, and push it. With a lever you just stop and reach out your hand - it will automatically find the lever. There is a principle known as KISS, or Keep It Simple Stupid, and it applies to gearshifts as far as I'm concerned.

Now I realize that most automatic transmission shifters no longer have nor need a mechanical connection to the transmission. All the shifting is down by solenoids. I, and many others, are tactile and we like levers. But if you're going to use buttons or those twist knobs please put them where they are more convenient to operate. 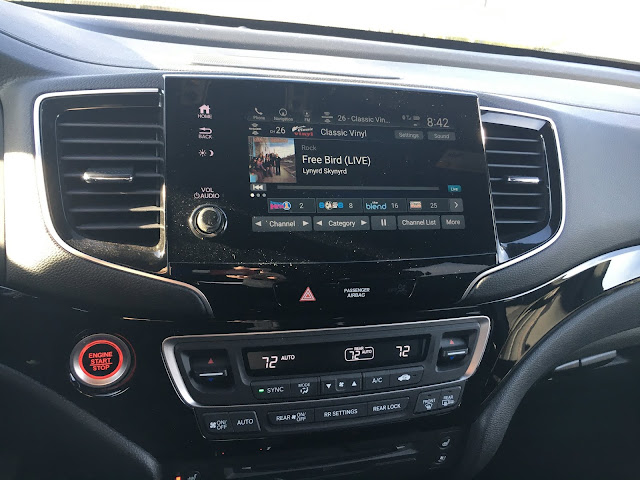 Most of the controls were easy to use but the only way I could find to change the channel/station of the radio was by using the touch screen. Not the easiest thing to do while you're driving. I didn't try voice control because to be frank I've never had good luck making them work.

The Pilot can seat up to eight (2 front, 3 middle, 3 rear). The Black Edition seats seven (2, 2, and 3) although the rear seat is best for youngsters in my opinion.

There was one other little thing that bothered me. I couldn't quite put my finger on what was going on but it seemed that with the transmission program in economy (normal) mode it was sluggish from a stop. At first I thought I just needed to give it a little more throttle but then I wondered if the transmission was starting off in second gear. Most people probably wouldn't even notice it.

The Pilot is the first vehicle I've driven with Start/Stop (engine shuts off when you stop at a light) that was so smooth I didn't notice when it restarted. And it restarted quicker than I could move my foot from the brake to the accelerator pedal. Good job Honda.

Every now and then I best the advertised fuel economy of a test vehicle. This wasn't one of those times. Honda's EPA figures for the Black Edition are 19/26/22 (city/highway/combined). I came close to the highway figure but about 5 mpg lower for the city figure.

As you'd expect for a top of the line, fully equipped model the Pilot Black Edition is not inexpensive but it is reasonable at $50,715 including delivery fees and a full tank of gas.

Even with the nits I picked I would consider a Honda Pilot if I was in the market for a SUV. I know and trust Honda. You should too. 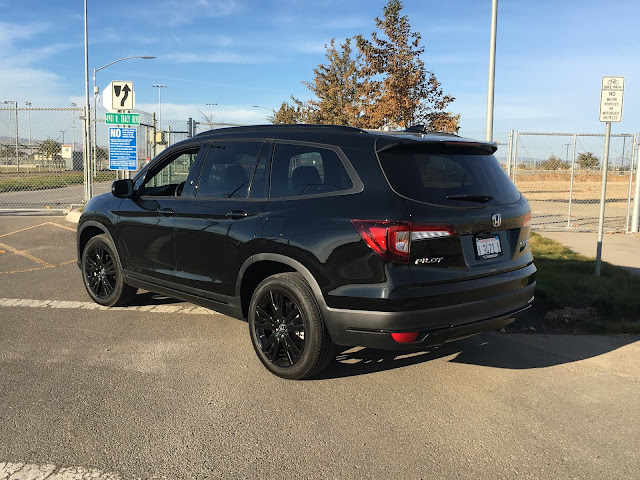