I'm headed to WeatherTech Raceway Laguna Seca this coming Sunday for this race as a guest of Lexus. You should head on down too! 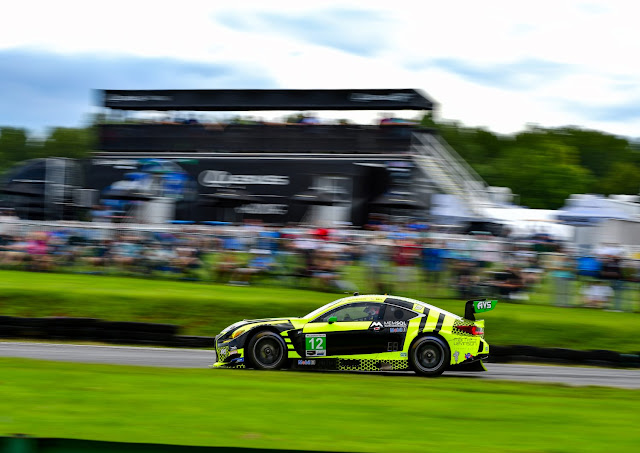 Race Team Looks for Success at Track Where Lexus Serves as Official Luxury Vehicle
SALINAS, Calif. (Sept. 13, 2019) – Lexus and AIM VASSER SULLIVAN (AVS) have just two races remaining on the 2019 schedule as they travel to the West Coast to WeatherTech Raceway Laguna Seca for Sunday’s two hour and 40-minute IMSA race.
Lexus is just five points behind the leader in the GTD Sprint Cup Manufacturer’s Championship standings going into the final sprint race of the season this weekend. Lexus’ successful run in the new GTD Sprint Cup is on the strength of six top-five finishes by AIM VASSER SULLIVAN (AVS) in seven sprint races this season, including back-to-back wins by AVS drivers, Jack Hawksworth and Richard Heistand, at Mid-Ohio Sports Car Course and Detroit’s Raceway at Belle Isle Park. Townsend Bell and Frankie Montecalvo also earned podium finishes in sprint races at Detroit and Canadian Tire Motorsports Park.
After nine races this season, the AVS Lexus RC F GT3 entries have combined to earn two wins, five podiums, nine top-fives and 14 top-10 results. Bell and Montecalvo currently sit fourth in the overall IMSA GTD championship standings, while Hawksworth and Heistand are sixth with two races remaining.
Along with the on-track competition, Lexus is celebrating its 30th anniversary as a brand this month and as part of its partnership with Laguna Seca as the official luxury vehicle, the manufacturer has planned unique experiences at the 11-turn, 2.238-mile Northern California road course for fans and Lexus owners during the race weekend.
The Lexus Racing Experience (LRE) activation display will be onsite in the IMSA paddock this weekend at Laguna Seca, featuring Lexus F performance vehicles and interactive experiences for fans to enjoy and learn about the Lexus brand. Fans can get an up-close look at a 2012 Lexus LFA exotic coupe that will be on display at LRE, as well as on the race track, during IMSA’s hot lap program.
The Lexus Owners Lounge debuts at Laguna Seca this weekend and will be located within the Lexus Racing Experience. This unique lounge is an exclusive experience for Lexus owners and their guests to relax, recharge and enjoy great views of the race circuit. Lexus owners will also enjoy a free, convenient parking area located onsite.
The ‘Lexus Performance Cafe’ will also be onsite at Laguna Seca and located at the Torque Show set in the IMSA paddock, where fans can enjoy a complimentary full-service espresso bar.
The Lexus GS F will lead the field to the green flag as the official pace car for Sunday’s IMSA race and there will be a familiar face waving the green flag as Hall of Fame racer, Scott Pruett, is set to serve as the Grand Marshal. Pruett is the winningest driver in IMSA history with 60 victories, including 22 wins in a Lexus-powered prototype for Chip Ganassi Racing from 2004 to 2009. The Lexus Brand Ambassador previously earned four podium finishes in a Lexus-powered Prototype at Laguna Seca, including a win in 2005 and a pole position in 2009.
Sunday’s IMSA race at Laguna Seca will be broadcast live on NBC, beginning at 3:00 p.m. EDT/12:00 p.m. PDT. The race action will also be live on the NBC Sports App and NBCSports.com. Fans can also follow Lexus Racing on Facebook, Instagram and Twitter by using #LexusRCF GT3, #LexusPerformance and #LexusRacing, and online at www.Lexus.com/Motorsports.
Email Post