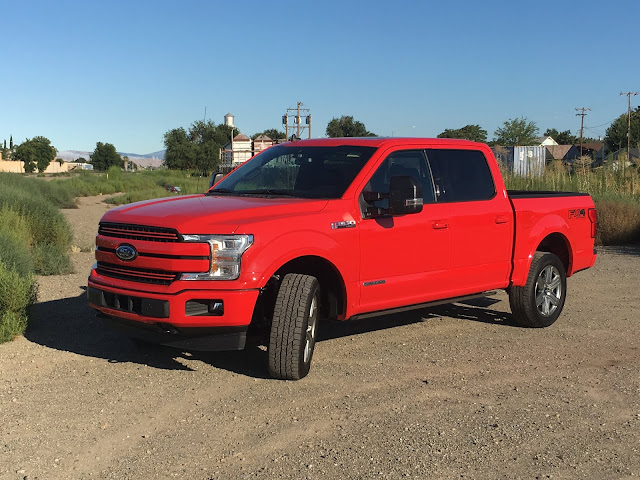 I swear that half ton trucks do not exist anymore. In fact no one should refer to any pickup as a half, three-quarter, or one ton anymore. This F-150 has a payload capacity of 1,720 lbs. One version of the F-150 is rated at almost a ton and a half! So I’m going to say there are big, bigger, and humongous pickup trucks.

Ford offers five different engines in the F-150, two EcoBoost V6s, one naturally aspirated V6, a V8, and the engine is the test truck, a turbocharged, 3.0-liter V6 Power Stroke diesel. Diesels have come a long way since their noisy, smelly days. Partly through engine compartment insulation and partly due to design, the V6 Power Stroke was almost as quiet as a gas engine (inside the truck it was as quiet).

Diesels are used for two reasons. First is their torque. The Power Stroke V6 makes 440 lb-ft at 1,750 rpm. Yes the torque is less than some other Ford engines but it comes on much earlier. The second reason is fuel economy. In the as tested configuration (V6 Power Stroke, 4X4, 145” wheelbase) the diesel is rated the best of all powerplants at 25 mpg highway and 20 city. I came close on a round trip to the Monterey Peninsula at 23.5 mpg including driving around the area and at 75 mph on I5. Add in the gargantuan 36 gallon extended range fuel tank and you could drive round trip to LA without refueling!

The transmission is Ford’s new (shared with GM) 10-speed automatic. It worked without a hitch, as it should. There is a dial to select the different drive modes (2WD, 4WD Hi, 4WD Lo, etc.) that I never messed with. I did not go off-road. (It never seems to fail that I get some big 4X4 when I have a road trip planned.)

One of the complaints I have against most modern full-size pickups is that they sit up too high. Ford has the perfect solution – their automatic folding running boards! Often I find running boards too narrow for my big feet. And as I found out off-roading in another auto makers 4X4 running boards can be an impediment when rock crawling. Ford’s power folding running boards are wide enough for me and the automatically fold down when you open a door. When folded up they are completely out of the way. Great feature. 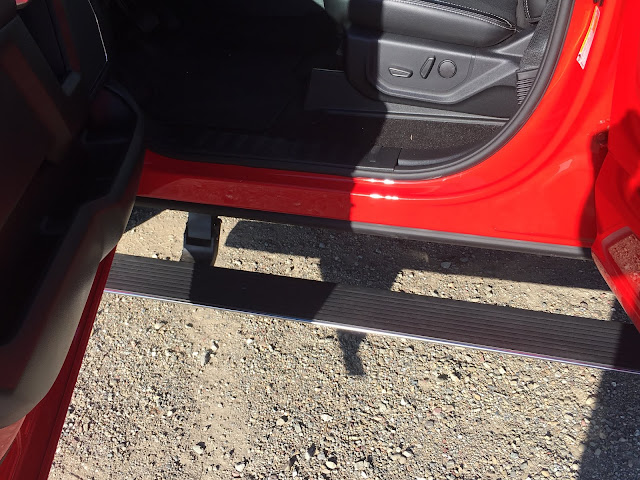 I can’t say anything about the load carrying capacity. I did bring home four bags of mulch, maybe 80 pounds total. The bed is only 5.5’ so if you’re hauling lumber remember your red flag. A longer 6.5’ bed is available if you opt for the longer wheelbase. An 8’ bed is available in other models.

A SuperCrew has a four-door, 5 or 6 person (depending on what seats you order) seating. I think most buyers would go with the 5 person seating.

I am not a prospective new truck buyer. I have no need for a work truck. So I was amazed at how competent this F-150 was on my trip. Yes it is big, and on some back roads it seemed really wide. But it was comfortable and relatively easy to maneuver in town. I didn’t use the parking assist or the trailer backing up system so I can’t report on those systems. Given the advancements in technology I’m sure they work just fine.

Any complaints? One or two minor issues more related to me than the truck. We had a couple of really hot days while I had the truck. Normally when I get into a vehicle that’s been sitting in the sun I punch the MAX A/C button. So I looked over and saw MAX and pushed it. I drove for a few blocks with the system set on MAX defrost before I realized there was no cold air. I wear glasses for reading but not driving. I actually had to put on my glasses to see the difference in the buttons.

The other minor complaint was the placement of the electric parking brake button. It’s on the lower left side of the dash where I couldn’t see it. After a few days I got used to where it was and could find it by feel.

Trucks are not cheap anymore. Nor are they cramped work vehicles with the emphasis on cargo capacity over comfort. More and more trucks are a combination of work and family transport. Look around; you’ll see many four-door pickups. 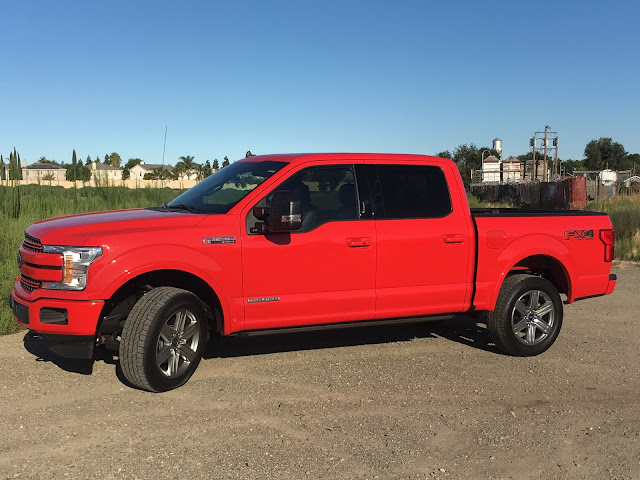 Sometimes I have to make choices about what review goes where. I would love to have every review in the Tracy Press but that isn't reality. Until recently diesel engines were restricted to larger, more heavy duty pickups. Ram and now Ford offer small(er) diesels in their 1500 and F-150 models now. This is big news (at least to me). But I had to make a choice so the F-150 diesel is here.