It's the summer doldrums. The time before Monterey Car Week starts and I've driven just about every 2018 model available to me and the '19s aren't here yet. A friend suggested I write an article about my car, my 1995 Chevrolet Lumina that another friend dubbed "Luminati." 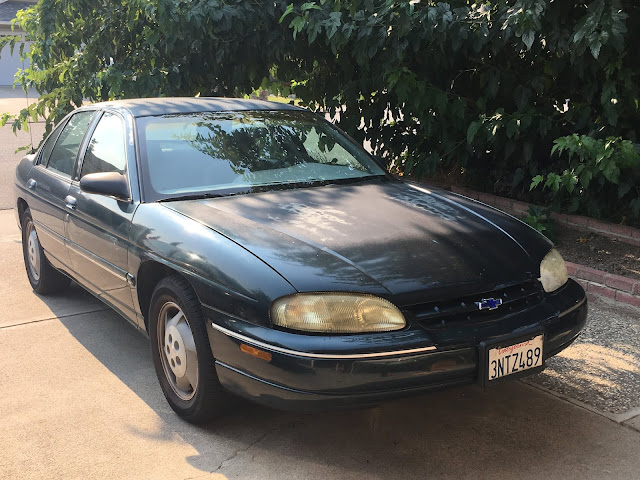 I bought the Luminati over three years ago for $1800. I'd gotten rid of my '87 Toyota truck and needed a driver other than my '64 Ranchero. I'd scoured Craigslist for weeks but did not find anything suitable. And then the Luminati appeared. It sounded too good to be true - low miles and a price I could afford.

When I went to see it it didn't look quite that good - the clearcoat was peeling and the dash was cracked and warped by the sun. The guy selling it said it had been his mom's car and his daughter had used it for a year or so in Reno. The odometer showed just under 70,000 miles. I drove it and it seemed okay mechanically so with a little haggling I got it for $1800 (he was asking $2000). I got it smogged (needed a gas cap) and registered it. 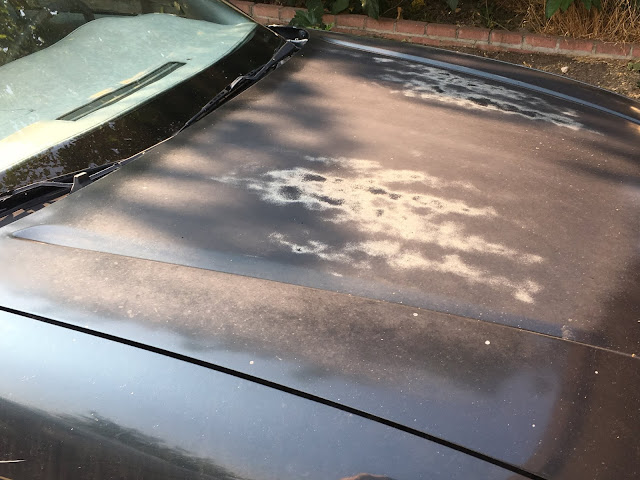 Worn out paint on the hood. 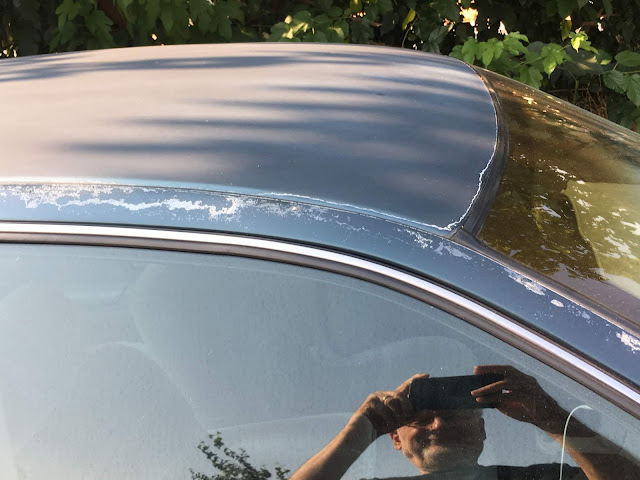 Peeling clearcoat (who is that guy?) 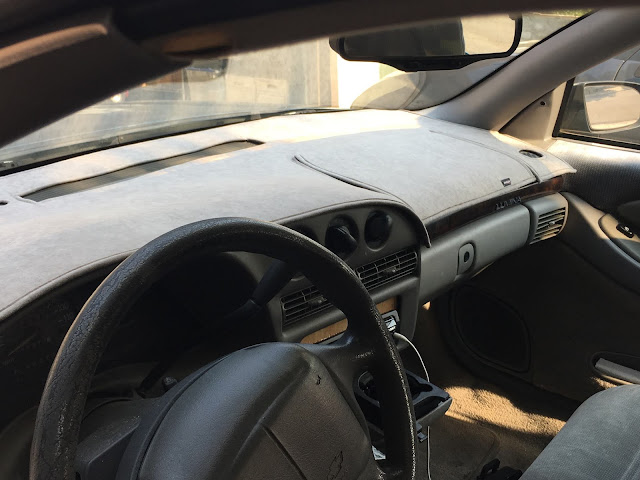 I haven't driven it that many miles, around 9,000, since I bought it and it's been mechanically reliable. I've done routine maintenance (changed the oil and filter a few times, and new front brake pads). The engine, the base 3.1-liter V6 runs fine. On trips it gets around 26 mpg. The transmission, a 4-speed automatic, shifts crisply. In many ways it is the best used car I've bought.

But it is also one of the worst cars I've ever owned. The 1990s may have been the nadir for GM. The Luminati is what I consider a large car; it's a 4-door sedan with seating (allegedly) for six (split bench seat up front). On paper even the base model like mine is well equipped. It has A/C, AM/FM radio (although the original radio was defective), power windows (auto down for the driver's). But the devil is in the details and it seems like GM didn't sweat the details.

The peeling paint is a problem but not specific to GM. Cheap plastics though? I have no idea where the Luminati has been but the plastic bits, inside and out, have not fared well. The dash looked terrible - it is cracked in places and the cover for the right side air bag was curled up and brittle. All the interior door panels are falling apart. Attachment points for the taillights (which spans the whole rear) have broken (the taillight lenses are almost flat even though the body isn't). The right front headlamp assembly had one attachment point break so the light bounced around (I kind of fixed it). The cowl panel that covers the windshield wiper linkage is so brittle all I need to do is look at it and it breaks. 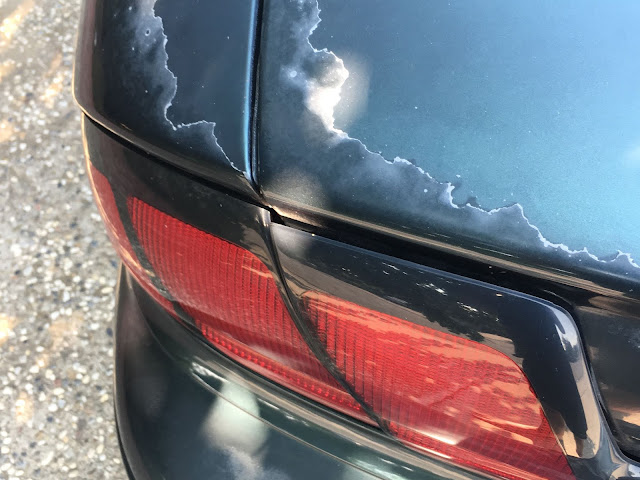 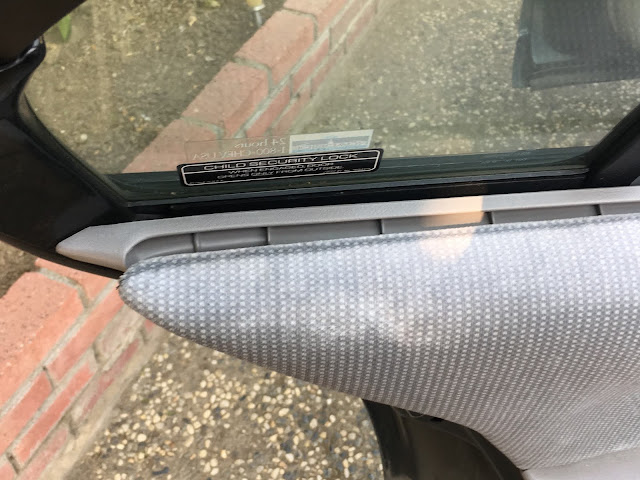 Evidently the fabric part of the door panel is supposed to snap into the plastic part. Obviously it doesn't work. 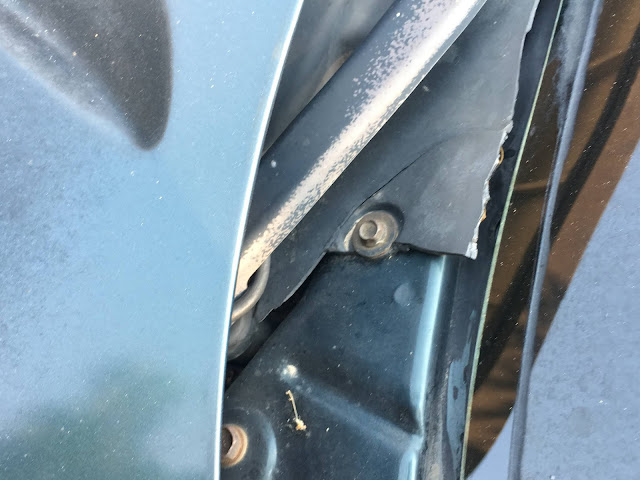 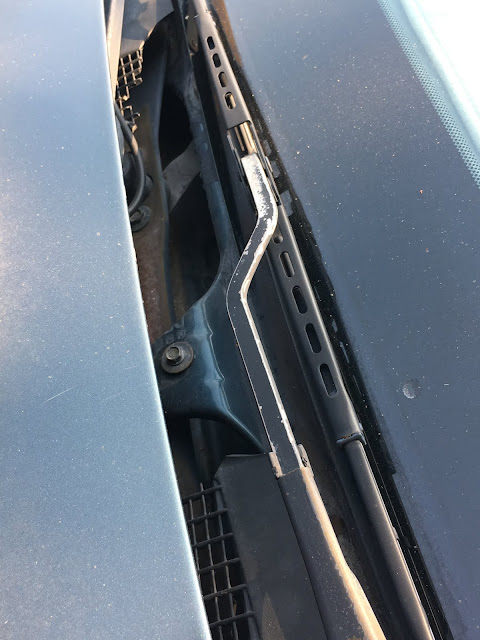 The plastic cover for the cowl has turn so brittle it breaks apart at the touch.

I've had to replace two window switches and one window motor. Evidently this is a common problem. One switch just stopped working, the other one worked intermittantly. The driver's window motor at first wouldn't work in extremely hot temperatures and then gave up the ghost completely.

In their quest to package as much as possible under the hood GM has made even some usually simple tasks difficult. Want to replace the battery? Good luck. With a a little hunting you might be able to locate it. Need to replace a fuse or relay? There's a brace that needs to be removed first. The "Low Coolant" warning light has been on for almost as long as I've owned the Luminati (a known problem I've been told) and will stay on because the darn sensor is so hard to get at. 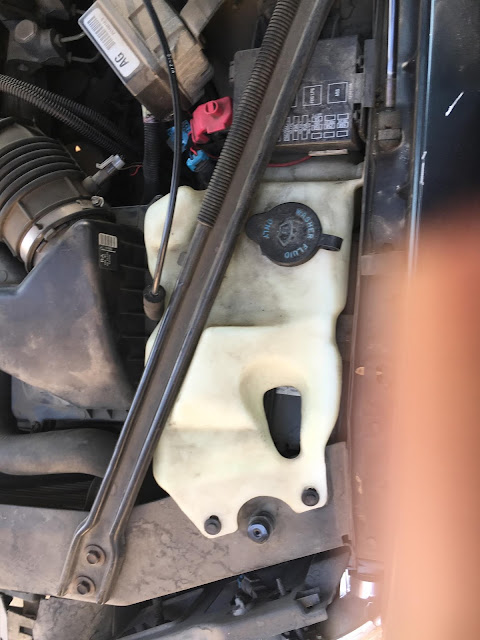 Underneath that brace and the windshield washer fluid reservoir is the battery (really, it's there). Notice that the brace goes over the relay box.

One design feature that GM has used, and I know other auto makers have too, is to limit the front seat's rearward movement in order to give the rear seat more legroom. That's really nice but I don't drive from the rear seat. Two more inches of legroom up front would be nice.