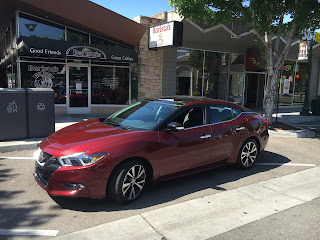 Thirty-five years ago the Maxima was created. It had rather humble beginnings being based on the Datsun (Nissan’s former name in North America) 810, a car that almost no one loved. The Maxima essentially used the Z-car’s inline six-cylinder. If memory serves me correctly the Maxima was sold as a 4-door Z. In many ways the Maxima was one of, if not the, first luxury sport sedans to come from Japan.

The Maxima has grown up in actual size and in stature since then. Back then it was a mid-size car and it is now considered a full-size. It has many competitors but it is still revered as a very competent luxury sports sedan.

The newest Maxima is a very good looking car although to my eye it looks best in the darker colors. Some of the sharp edges seem highlighted in the lighter colors and I find them jarring. The test Maxima was painted Coulis Red (coulis is a thick sauce made from pureed and strained fruits or vegetables). The color got a lot of good comments.

The test Maxima was a top of the line Platinum version; there are six different versions available ranging from the base Maxima up. The Platinum is the luxury version. There is a SR version that is more sports oriented.

Under the hood is the great Nissan 3.5-liter, DOHC, all-aluminum V6. It is the same basic engine that powers so many Nissan models including the 370Z where the engine size is increased to 3.7-liters. In the Maxima this sweetheart of an engine produces a smooth 300 hp and 261 lb-ft of torque. Like so many Nissans the Maxima uses a Continuously-Variable-Transmission that is programmed to shift; can be shifted manually and can be changed from Normal to Sport modes by the driver.

The Platinum has all the bells and whistles, in fact probably more than I’d ever use. I did use the adaptive cruise control and for the first time I actually didn’t chicken out and let it do its job. On a drive back to Tracy from Pleasanton in stop and go traffic (normal) I set the cruise at 70. The computer kept adjusting the speed so that the Maxima maintained a safe distance from the vehicle in front no matter what speed traffic was going. When traffic actually came to a stop the Maxima stopped without my assistance. It then started up again. The acceleration by the computer was a little slow but I was impressed.

I am not a big fan of sun- or moon-roofs. They usually make too much noise for my tastes. But if you’re a fan the Maxima has a really large one. And for the rear seat passengers there is a glass panel (non-opening) so they can gaze at the stars.

Being relatively new to the world of smart phones I like a car with a really good stereo so I can listen to my own tunes. The Maxima Platinum has a sweet Bose® Sound System with 11 speakers. A guy has to know what’s important.

If you’ve been reading my columns you know I’m no fan of ultra low profile tires. The tires on the Platinum are 245/45R18s and they are harsh over sharp bumps. Thankfully Nissan has done a decent job of tuning the suspension so that they are not super annoying. (The SR has 245/40R19 tires that I did not test.)

Admitting that no car is really cheap today (the average transaction price for light vehicles this year is around $34,000) I still choke when I see prices. The Maxima Platinum has a starting price of $39,960 according to Nissan’s website (www.nissanusa.com); the test Maxima was $40,905 including a 6-piece floor mat set and destination charges. A base Maxima is $32,510 so there’s a lot of room depending on which Maxima you’d like. 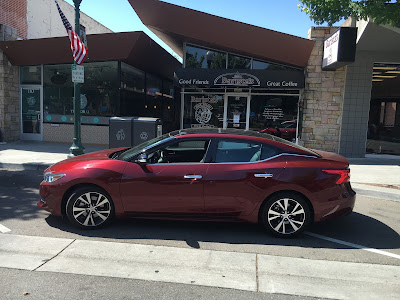