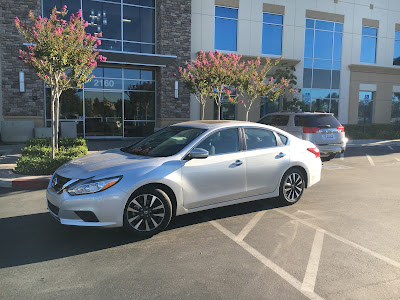 The Nissan Altima is one of those cars that nobody notices but they are everywhere. It is the kind of car many auto writers scoff at and call an appliance, as if that is a bad thing. What I think these writers mean is that it isn’t a pseudo sports car. Aw gee.  One definition of an appliance is a device or piece of equipment designed to perform a specific task. The Altima, especially in its 4-cylinder models, is a very nice, all-round, 4-door sedan. There is absolutely nothing wrong with this. Obviously many people agree with me because I see a ton of Altimas on the road.

I have absolutely no idea what the SV stands for but the 2.5 denotes a 2.5-liter, DOHC, 4-cylinder engine that in the Altima makes 182 hp. It is connected to a CVT (Continuously Variable Transmission) and drives the front wheels. Pretty basic stuff. I used to hate CVTs (not for any good reason except they are different) but I am to the point now where I don’t really even notice them.

The Altima with the 2.5 is no barn burner but it isn’t a slouch either. Buff books put the 0-60 mph times at a tad over 8 seconds. That is more than adequate for most people. (Yeah I know everyone thinks they are a dragster driver but you’re not.)

When the first Altima was introduced it was a smaller car. It had a wheelbase of 103.1”; it is now 109” and the total length has been stretched about ten inches. What was once a tight five passenger car is now roomy.

I only work part-time so my commute isn’t every day. But I do drive to Pleasanton and back during rush hour. During my drive in stop-and-go traffic I really appreciate a comfortable car. I don’t want to shift gears. The Altima fits the bill. With one exception. And I don’t know if that’s Nissan’s fault.

The Altima gets traffic alerts. This would be really handy except they were short on info. The alerts are oral and a message like “Exit ahead is closed.” Really doesn’t help. Which exit? Or how about “Traffic accident on I205”? Really? It’s a fairly long stretch of highway. And just what am I supposed to do? I drove another car that when traffic on 580 was stalled rerouted me. Now that’s helpful. So I learned to just ignore the Altima’s warnings.

Nissan has done a nice job of keeping the Altima fresh. It has the same basic shape for some years but it looks almost entirely different. The Altima was redesigned three (almost four) years ago and freshened this year. And it looks like a Nissan (some cars look so generic even I have a hard time knowing what make they are at first glance).

The fuel economy of the 2.5 varies a bit depending on model but highway numbers are 37-39 mpg. That is darn good for a 4-door sedan you can comfortably fit five people into. The fuel tank holds 18 gallons so figuring a fill up of around 15 gallons (so you don’t run on fumes) you’ll be stopping for bio-breaks long before the Altima needs gas.

Even though the Altima had overly large tires in my opinion (215/55R17) it didn’t have the slam-bang ride of many cars with low profile tires. The ride was relatively smooth especially considering how terrible some of California’s roads are.

The trunk holds 15.4 cubic feet of stuff. For calculation an average carry-on bag is about 1.6 cubic feet so about 9+ carry-ons. The liftover height into the trunk is just under 27”. If you need extra storage the rear seat is a 60/40 split that opens up into the trunk.

Given the number of older Altimas I see on the road (a totally unscientific survey) they seem to last. You know, like an appliance that you don’t need, or want, to replace every year. An appliance doesn’t have to be boring. But if boring gets you back and forth to work, takes you and the family on vacation and is reliable I’d take it. And I’m not saying the Altima is boring. 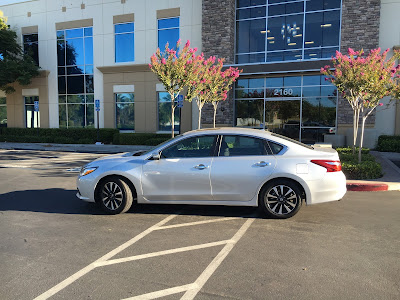