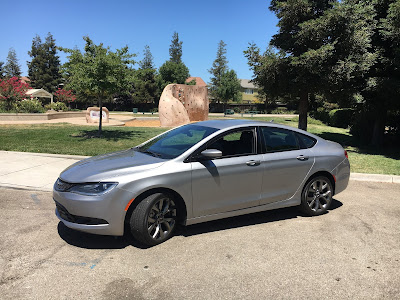 The Chrysler 200 has been bashed and lampooned almost from its beginning. Intended to be the little brother of the 300, a name tag with a long history, the 200 originally shared its platform with the Dodge Stratus. Although this is not uncommon among auto makers the 200 just didn’t measure up in the eyes of many. I am one of the few who liked the styling of the first 200 even if the execution wasn’t up to par.

Enter the new Chrysler 200 in 2015. It is the first Chrysler designed under the Fiat Chrysler Automobiles (FCA) era. It is a much better car. The question remains if it will be tarnished by the previous version.

The Chrysler 200 is a mid-size, four-door sedan intended to compete against vehicles such as the Chevrolet Malibu, Ford Fusion or Toyota Camry. It has styling cues to tie it to the other Chrysler models. Chrysler is FCA’s upscale division so I see the 200 as competing against Buick, Lincoln or Lexus.

I was impressed with the test 200’s fit and finish. Now you’d expect a press car to be perfect but in reality they are just cars that will eventually end up on some dealer’s lot.

The test car was a 200S with All-Wheel-Drive (AWD). It was a well-equipped and well-optioned car. There were two options I could have done without though; the 19 inch wheels and the Blind Spot and Cross Path Detection system. The wheels, well who really needs 19” wheels? I mean the standard wheels on the 200S are 18 inches. And the warning system? I really do not need or want something that is constantly screaming “WATCH OUT, YOU’RE GOING TO DIE!” whenever anything is even remotely close. All these systems seem to do is make my passengers more nervous.

A 9-speed transmission is kind of new to most people but Chrysler has done an excellent job with theirs. You might expect it to be busy – upshifting and downshifting all the time – but in fact I was hardly aware of most shifts. The only thing that bothered me about the transmission, and this isn’t specific to Chrysler, was the shifter itself. I simply do not like a dial for a shifter. Let’s face it most people are so used to a traditional shift lever that they do not need to look when the shift. I had to constantly look at the dial to make sure I had it in the proper gear. Maybe it’s just me but I doubt it.

I could also do without AWD. I happen to believe that AWD and 4WD are over-hyped. They are not needed in most driving conditions and they tend to give drivers a false sense of security. I have not driven a 2WD 200 so I do not have a direct comparison but the 200S with AWD felt heavy. In fact it is about 325 pounds heavier than a 2WD version. So unless you go skiing almost every weekend I see no reason to go for the AWD. 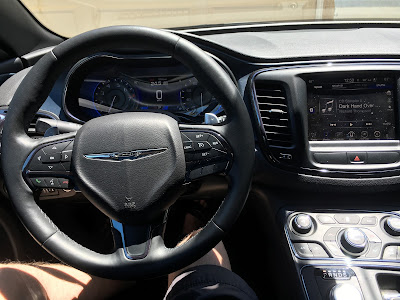 One option that I absolutely would have to order would be the leather trimmed seats. OMG! They were just gorgeous.  The color combination – black and what Chrysler calls Ambassador Blue (kind of a slate blue-gray) was perfect. I cannot remember another Chrysler interior that wowed me as much.

All in all I like the 200S. It’s hard to say how a car will age in just a week’s worth of driving. The 200 seemed well put together. Somehow FCA has to convince the buying public that the 200 really is a valid little brother to the 300. It has the looks. The engines seem up to the task and it had a nice growl when accelerating. The build quality was good.