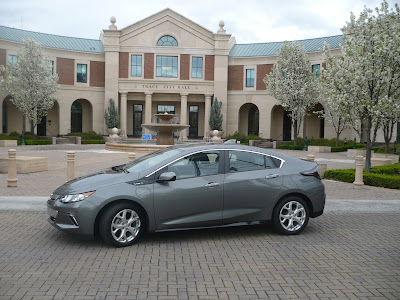 I like the Volt. It’s a good looking car, maybe one of the best looking Chevrolets. But let’s get one thing straight right off – no matter what Chevrolet calls it the Volt is not an “electric” car. It is a hybrid in my book. Chevrolet calls it an extended range electric car. What this means is that you can drive 53 miles on the battery before it has to switch over to the gas engine. Overall the Volt has a 420 mile range. So for the first 50 miles it is an electric car but after that it is a gas fueled car.

According to a calculation I found that used figures from the EPA the Volt gets 2.7 miles per kilo watt hour. PG&E charges approximately 0.12 cents per kilo watt hour so the cost to recharge the battery pack after 50 miles would be $2.22. Chevy doesn’t give fuel economy figures for highway with just the gas engine but says the combined city/highway rating is 42 mpg. As this is being written gas prices in Tracy hover between $2.10 and $2.30 per gallon.

Charging the Volt is relatively easy. It comes with a charging cord that can be plugged into any household 120-V outlet. If the battery is completely depleted it may take up to 13 hours to recharge. For faster recharging, around 4.5 hours, you have to get an electrician to install a 240-V outlet.

None of this should take away from the appeal of the Volt. Whether you consider it a hybrid or an extended range electric it is still a nice car. 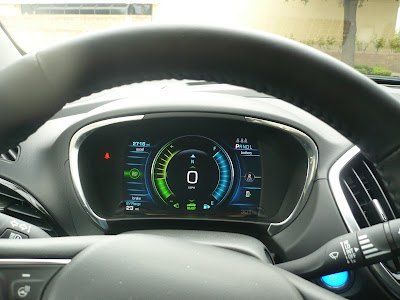 For a compact car (EPA’s rating) the Volt is pretty roomy inside; that is as long as you don’t consider the Volt a five person vehicle. I have no idea how Chevrolet figures three people will fit in the rear seat – the center of the seat doesn’t even look like a seat and there’s a console in the way! So let’s call the Volt a four person vehicle. 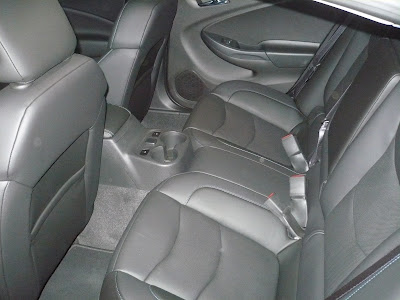 The first thing you have to get used to in an electric vehicle is the noise, or rather lack of noise. If you’ve never driven an electric vehicle it is rather eerie. You just glide along. The next surprise is the acceleration – it is astounding. An electric motor has 100% torque as soon as you hit the accelerator. Chevrolet says the Volt will hit 60 mph from a standstill in 8.4 seconds. That’s not bad especially considering that the Volt weighs 3,543 pounds. That’s about 500 lbs. more than the similar size Chevrolet Cruze.

Powering the Volt are two electric motors and a 1.5-liter, 4-cylinder, 101-hp gas engine. Power is transmitted to the front wheels through what Chevrolet calls the 5ET40 Electrified Transaxle. Seamless is what I’d call it. Even when I’d depleted the battery it was smooth. To confuse the matter the Volt will operate on electric power even if the battery is completely depleted. One of the electric motors provides power for the battery (an electric motor can be a generator). The technology behind the Volt’s propulsion system is slick; you have to give Chevrolet that.

Given that I only have a vehicle for a week sometimes I can’t quite figure out how everything works. I like to listen to my own music; I have about 250 songs on my phone. On the cars that have Blue Tooth it’s been fairly simple to listen to my music. But for some reason (my own ineptitude?) with the Volt whenever I tried to sync with my phone the system went straight to my Pandora. I never did figure it out. Not the end of the world but annoying.

The Volt has many of the sensors so common now – backup camera, blind spot warning systems, lane departure, etc. The backup camera is handy especially as there are so many huge SUVs in parking lots. The camera doesn’t just look to the rear but to the sides some too. That’s a good thing. But sometimes I thought they were overly sensitive, sounding the alarm because someone or something was “too” close when they weren’t. In a busy parking lot the alarm sounds almost non-stop as you try to back out. Makes me think of the autonomous car that stops at a four-way stop and won’t proceed because the human driven vehicles never come to complete a stop.

On one occasion an alarm sounded and a red light flashed (only once) and for the life of me I couldn’t figure out why. I was driving on a residential street, actually driving under the limit, with absolutely no one or nothing around. Did the car see a bird or a squirrel? I still have no idea.

There are two Volts, a LT and the Premier I drove. According to the Chevrolet site the LT is $33,995 and the Premier is $38,345. Frankly I think both are too pricey. (A plug-in Prius is only a little lower.) 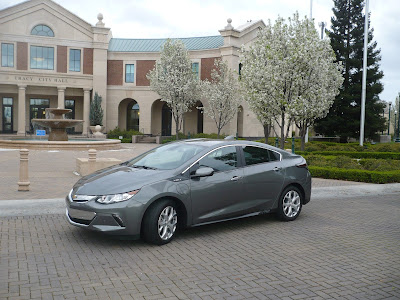 Hopefully I’ll get a chance to test a full electric in the near future for comparison.