Well I've kind of recovered from my week in Monterey. Even though I tried to pace myself (last year I was dead tired by Sunday) I still missed at least a couple of events and I really regret it. I'll tell you more further onn down.

My first day, Tuesday, was at the Concours on the Avenue in Carmel-by-the-Sea. I hadn't expected to be able to make it but my previous engagement was postponed so I drove down early, found a parking spot, and spent a few hours looking at some fabulous cars. Pictures are up in another article.

Concours on the Avenue is a free show so I always try to spend a little money in Carmel. Ocean Avenue is closed for the show - essentially the whole town is shut down - so it's only fitting that you patronize some of the shops.

Later Tuesday afternoon I went out to Folktale Winery (8940 Carmel Valley Rd) for a small but friendly car show and a glass of wine.

Somehow I forgot to get to the Embassy Suites for Automobilia Monterey. Maybe it was because I didn't have to go to the Embassy for credentials to the track.

Wednesday was light (pacing myself). Little Car Show on Lighthouse in Pacific Grove. It's a fun "little" show. I always have lunch at Goodies (http://www.goodiesdeli.com/) a very good and reasonably priced sandwich shop.

Then I went around to some of the auctions and to take my pictures. Two auctions were in a bit of a mess - literally. The Portola Hotel & Spa in downtown Monterey, the site of RM Sotheby's, was doing a major - MAJOR - renovation. The plaza out front, where many folks gather to watch the cars drive into the auction room, was a construction zone. Over at the Monterey Marriott the lobby was closed for renovations; I'm not sure if, or how much, this disrupted the Rick Cole Auctions.

Russo & Steele, with their new(ish) home near Fisherman's Wharf seemed fine though. Plenty of high quality cars and a nice mix of muscle and exotic.

Mecum, at Hyatt Regency Hotel & Spa (actually on the golf course) had more cars that any other auction - great to look at but a real pain for locals who often found the roads clogged with transporters.

Bonhams out at Quail Lodge always has interesting, quality vehicles. One car stood out for being the odd lot - a 1964 Pontiac Tempest station wagon. Don't get me wrong the car was in new condition but it did seem a little out of place with all the other cars.

Gooding & Company's Pebble Beach Auctions seems to always be the best of the best (no offense to the other auctions). It's always like "Wow!"

The competition between the auctions, especially in finding worthy cars, has to be fierce. There are only so many great collectible cars out there right? Yet somehow every auction comes up with at least one "OMG!" car every year. For me, as you can tell from my pictures, there are so many "OMG!" cars that if I had a billion dollars I'd still be broke.

The total sales figures for all the auctions combined hasn't been tallied yet. Evidently the sales are down some but there were still so many cars sold for over a million that it boggles the mind. Right now the total is estimated to be $344 million.

But enough about the auctions. On Thursday the Pebble Beach Tour d'Elegance presented by Rolex (got to get in the plug right?) is where some great, really expensive cars, get to be driven and shown off on the Peninsula. The route was shortened this year due to the terrible fires that have threatened and devastated the area. I, along with thousands of others, set up on Ocean Avenue, Carmel-by-the-Sea, to watch them drive in. A couple made like tea-kettles, but the majority were fine. It's really neat to see such great cars being driven.

I went out to dinner Thursday night with my pal and host Doug to the Crown and Anchor (http://crownandanchor.net/), a spot we go to at least once during the week.

Friday was another light day. I had lunch at The Grill at Lovers Point, Pacific Grove - decent fish and chips - but the location, well you sit just above a little cove looking out at Monterey Bay. A word of caution though; the seagulls are crafty and will steal your food if you're not on your toes.

After lunch I went back to Lighthouse Ave. for another car show, 22nd Annual Pacific Grove Concours Auto Rally. It's mostly locals who drive around the countryside and end up on Lighthouse to show off their cars. You get some really interesting cars and some "I'm rich and I bought ..." cars. I'm sure you know which ones I prefer.

Friday night was special. Wine tasting, hors d'oeuvres, talking about some beautiful Infiniti cars, including the gorgeous 2017 Q60 coupe, with a great guy from Infiniti. And then a private concert with One Republic (http://onerepublic.com/kids360/). The concert was part of a fund raiser for firefighters. Bruce is not much of a concert goer; people often think I'm not having a good time because I'm kind of stoic but trust me, inside I'm rocking. One Republic put on a great show.

Saturday started early with breakfast at Concorso Italiano provided by Fiat Chrysler Automobiles and then the introduction of the Fiat 124. On hand were Bob & Patricia Bondurant because the 124 is going to play a prominent role at the Bondurant Racing School (https://bondurant.com/) and their new autocross classes.

Concorso Italiano is an almost an all Italian show (I say almost because a few non-Italian cars slip in). I swear you will see more Italian cars than have ever been built (okay so I'm over exaggerating). I always look for the unusual and there is always something.

After Concorso I visited the Concours d'LeMons a kind of tongue in cheek show. It's not really my cup of tea but it is interesting. And I give them credit for finding a niche. It seems that some people are actually taking the show seriously though because among all the junk and oddballs were actually some collectible cars.

I screwed up Saturday evening. I was supposed to go to the Automotive Fine Arts Society's 31st Annual Exhibition party at Pebble. And I forgot. I was tired and hungry so Doug and I went out for dinner at Sushi By The Bay. I'm still kicking myself because this year's poster for the Concours d'Elegance is by Ken Ebert. My apologies Ken. Here's the poster: 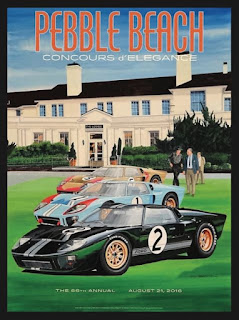 (I'm a little ticked off to see that people are already selling signed copies of the poster on Ebay. I have given away duplicates of some posters but I wouldn't sell a signed poster for any amount.)

The last day is the Pebble Beach Concours d'Elegance day. That's it. One event. The event. The culmination of the week. The one event where the crowds never seem to get smaller regardless of how much the tickets are ($325 advance, $375 at the door).

Despite the cost it looked like the crowd was as big as ever. The Concours raises will over a million dollars for charity, in fact almost $2 million last year. The cars are some of the best in the world. There is a category for just about everyone. A look though my pictures will give you an idea of what I liked this year.

My day at Pebble started at a press conference for the Petersen Museum. The Petersen has some interesting exhibits coming up as well as its 22nd Annual Gala hosted by James Corden on October 22. I've never been to the Petersen and I cannot afford the Gala but hopefully I will visit when I'm in the area next.

I walked the field gawking and photographing like a real rube. I did go into the Automotive Fine Arts Society's display and the art was outstanding. Money! If I only had more money.

After tiring myself out ogling the cars and people watching I headed to the Meguiar's hospitality suite. I wasn't sure if I was on their guest list as I had forgotten to call them. But they had not forgotten. Having someplace to sit and rest is heaven. Add in some really wonderful food, cold drinks, interesting people and stimulating conversations and the day is complete. I'm sure many of the people who were at Meguiar's were much wealthier than I but we are all car people and that's all that matters.

Besides all the wonderful people who gave me passes, food, drink and events, I want to give a huge thank you to all the workers. Without the hundreds of anonymous servers, chefs, cooks, maintenance people, police, etc, Monterey Car Week couldn't happen. They must get up at ungodly hours to cater to so many yet I never met anyone who was less than gracious.

And to my readers, you have to go to Monterey Car Week at least once in your life. Go to the free shows but if there is anyway you can make it happen go to Pebble. You will not regret it.

(You will note that I did not mention the historic races. The track did not feel I was worthy of credentials so I did not attend.)