I'm headed to Mazda Raceway Laguna Seca in Monterey this coming Friday, April 29, 2016. This weekend is the Continental Monterey Grand Prix, Powered by Mazda but I am going to watch the Global Mazda Battery Tender MX-5 Cup race. Every single car in the field will be a 2016 Mazda MX-5 Miata. 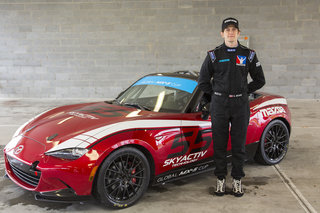 Glenn McGee and his MX-5 racer

I haven't been to a single model race in a long time, since 1990 when I worked for Honda Canada and I watched a couple of races of the Honda-Michelin Challenge. There have been others over the years. They all follow the same format - You buy a spec car and very little if any tinkering is allowed. Because the cars are as identical as possible it is all about the drivers and the racing tends to be really competitive.

That doesn't mean some racers won't try to find an edge. I remember in the Honda-Michelin Challenge hearing from one racer that if the engine was one litre of oil short it made more horsepower. Racers are racers; I'm sure they keep the tech staff on their toes.

I'll write more when I get back. But if you enjoy racing you should head to Monterey. There are four supporting races - IMSA Continental SportsCar Challenge, Global Mazda Battery Tender MX-5 Cup, Lamborghini Blacpain Super Trofeo, and Porsche GT3 Cup Challenge USA by Yokohama. The main event is the IMSA WeatherTech SportsCar Championship. It should be a great weekend and the weather is supposed to be perfect - sunny and low '70s.

Now few words about Mazda Raceway Laguna Seca. It is a fantastic track. SCRAMP (Sports Car Racing Association of the Monterey Peninsula) operating the tract since its inception in 1957. Some members of the County Board of Supervisors are not happy with SCRAMP's management and are trying to find another entity to run the "park." The track is hampered by rules that limit the number of races held there, and the noise level (remember that when it was built the only "development" near it was an Army base and the complaints didn't start until expensive homes were built within earshot). I don't live in or near Monterey but Mazda Raceway Laguna Seca is a benefit to Monterey County, California and the United States. I urge the Supervisors and SCRAMP to resolve their differences.
Email Post