I'm not one to go gaga over celebrity's cars but if that floats your boat here's a Ferrari for you. From my friend Cindy Meitle:

Los Angeles, CA October 10, 2015 – Beverly Hills Car Club has launched the eBay sale of an original 1983 Ferrari 400i once owned by world-renowned tennis icon John McEnroe. The highly collectible classic will be offered for sale online to the highest bidder starting Saturday, October 10 and ending Tuesday, October 20 at 2:08PM PST.  “The Ferrari has all of the class, style and sophistication of its previous owner and Beverly Hills Car Club is honored to be able to offer the Ferrari for sale on Ebay,” said Alex Manos, owner of one of the largest classic car dealerships in the United States. 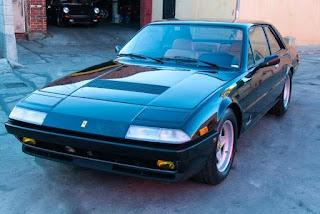 “We get offered cars from many celebrities, but it’s not often that we get a Ferrari from one of the world’s greatest living tennis legends of all time, John McEnroe. He was a force to be reckoned with and so is the Ferrari,” commented Manos. In the last few years, Ferrari cars have garnered heightened attention from collectors and investors as sale prices for desirable examples have been recorded in excess of $1 million to over $30 million.

McEnroe was at the top of his game in 1983, earning his fourth Wimbledon title by defeating Ivan Lendl in the Wimbledon semifinals. He then nabbed the Men’s Wimbledon title after defeating New Zealand’s Chris Lewis. Aside from being awarded tennis’ most prestigious Cup, it is likely McEnroe rewarded himself with this classic ’83 Ferrari.

“Ferraris and cars with provenance such as those previously owned by celebrities or other iconic figures, are certain to bring a great return on investment down the road,” said Manos. The car has an ideal color combination for almost any car, let alone a classic Ferrari. It's black with tan leather interior, has automatic transmission and 50,477 original miles. It is being made available for sale on Ebay http://www.ebay.com/itm/221910145856.