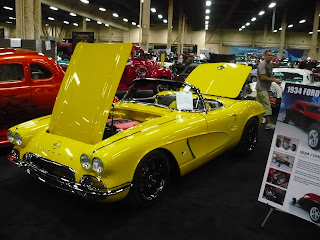 I'll let you know how much he got for it later.

Today I got to Barrett-Jackson early to watch some of the memorabilia sell, walk around to see the cars and just get a feel for the show. Never having been to Barrett-Jackson before I was interested to see how their auctions are handled. Outside of the fact that I cannot follow the traditional auctioneers (are they actually saying words?) I was impressed. While not as laid back as say Goodings or Bonhams, it is not a sideshow.

The cars I saw in the staging area all seemed to be of high quality. Not that they were all to my liking but everything looked professionally built and ready to drive home if you wanted to.

One thing that struck me, something that is different than the auctions in Monterey, is the fact that Barrett-Jackson has a vendor area; it is a complete car show with the exception that they sell the cars (car shows don't normally sell the cars).

I was also amazed at the number of general admission people, people buying tickets just to look around. Other auctions sell admission but in some ways it is to keep the crowds to a minimum. Not Barrett-Jackson, they encourage the general public.

I'm going back tomorrow and probably Saturday. I need to get some info from the media center, watch the car auction, and walk my feet off.