Trans-Am Legends Star on the Avenues of Carmel-by-the-Sea, CA. 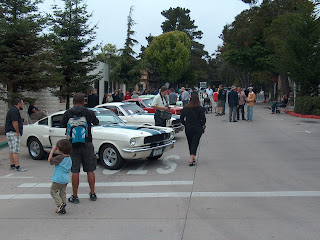 Carmel-by-the-Sea, CA, August 27, 2012.
On Tuesday, August 14, 2012, the avenues of the picturesque seaside town of Carmel-by-the-Sea reverberated with the roar of powerful engines, as an unparalleled group of historic racing cars from the legendary Trans-Am Series drove into the display area of the 2012 Carmel-by-the-Sea Concours on the Avenue. The sixteen cars, accompanied by a California Highway Patrol escort, represented most of the teams and brands that competed in the classic era of the series from 1966 to 1972.

The Trans-Am cars were just one of the highlights of the 6th edition of the Concours on the Avenue, which has quickly established itself as a must-do event in the crowded “Monterey Week” calendar, noted for its welcoming and inclusive atmosphere and extraordinary vehicles.  Thousands of spectator guests and local residents enjoyed almost 200 entries this year, arrayed on the tree-lined avenues of the charming village. The Concours on the Avenue marked the passing of Carroll Shelby with a brilliant class of thirteen genuine Cobras, spanning the full range of models from the 289’s to the 427’s.

Michael G. Tillson, Chief Judge at the event, stated “2012 has been, without a doubt, the best year ever for the Concours on the Avenue- the Trans Am class was over the top.” He went on to praise the talents of the more than 50 judges who serve at the Concours. “Their knowledge is astonishing, and they get it right and do it on time, with very tough choices in the class awards.” 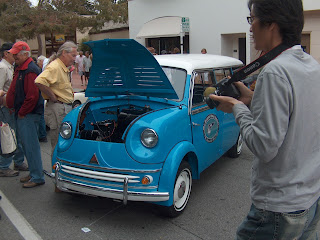 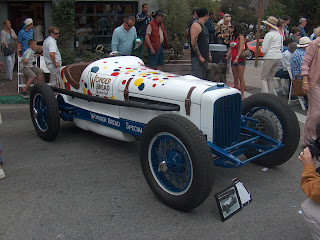 There was, however, apparently no challenge for the judges in their unanimous choice for Best in Show; Larry and Juana Carter’s stunning dark blue 1967 Ferrari 275 GTS/4 ‘NART’ Spyder.  It was the epitome of the guiding principle of the Concours on the Avenue- ‘Authenticity and Originality Matter’. While the Ferrari was judged best of the best, it was emblematic of the depth of quality in the display. Fifteen major awards, provided by sponsor Tiffany & Co. and presented by the announcing team of Ed Justice, Jr., Michael T. Lynch and Donald Osborne, went to cars as varied as a rare Lloyd 2-cylinder van done in period PanAm airlines livery, to a beautiful Ferrari 250 GTL Lusso and the Duesenberg-powered ‘Wonder Bread Special’ 1934 Indy Car.

The show is especially appealing to family audiences, thanks to its location in the heart of vibrant Carmel-by-the-Sea. It is an event in which the entire town shares, with many of the shops, galleries and restaurants also participating in the show with imaginative automotive-related window displays. Some of the vignettes also competed for prizes in the ‘Concours in the Windows’ contest. Tillson summed up his experience at this year’s event by saying, “The directors and volunteers do a heroic job to put this magical show on each year and I couldn’t be prouder to be associated with this event.”

With the spectacular background of the historic village, The Carmel-by-the-Sea Concours on the Avenue delivers ‘Sophistication with a dash of fun’ to both the hard core motoring enthusiast as well as the rest of the family. Guided by the principle ‘Authenticity and Originality Matter’, it gathers together the finest examples of a wide variety of vintage and historic sports, GT, racing, luxury and family vehicles, and displays them on the avenues of Carmel-by-the-Sea in a unique show which is open at no cost to spectator guests. A major beneficiary of the Concours on the Avenue is The Carmel Foundation, in support of the work the Foundation does for the senior community of the Monterey Peninsula. More www.motorclubevents.com