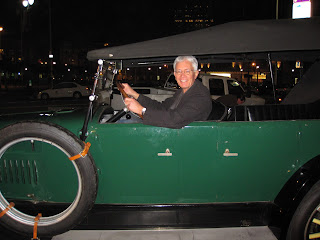 Photo: Alan Spencer is the chief judge for the 3rd Annual Marin Sonoma Concours d'Elegance and heads up a team of 50 seasoned judges who will review entries in 17 classes on display the May 15 event at the Marin Civic Center Fairgrounds. Spencer, 60, of San Anselmo, CA, is shown here with a 1924 Hudson, one of the vehicles in his Wheels agency.


The Judge’s Challenge:
An Eye for Elegance
It would seem a rather daunting quest.
How would one judge a class of fine motor cars arrayed for showing at an exquisite gathering like the 3rd Annual Marin Sonoma Concours d’Elegance?  And with more than 175 vintage, classic and significant vehicles on the greens of the Marin Civic Center Fairground Sunday, May 15, the challenge would seem almost insurmountable.
There is a skill and art to the process of judging and according to Marin Sonoma Concours chief judge, Alan Spencer, one important quality – elegance – will shine through.
“Condition, authenticity and presentation are, of course, important and we will look to all cars to be assessed by these criteria,” says Spencer, 60, of San Anselmo. “But what we seek at this event is a review based on elegance – the combined elements of proportion, color and visual appeal.”
Spencer and his team of 50 men and women, three judges per class, review the entries within 19 classes on display. For feature marque entries, like
the Rolls-Royce and Bentley cars shown at Marin, he will call in special judges to review the vehicles to their own class standards.
Judgement on judges?
“Well, it’s based on who you trust.” Spencer says.
“Our model here is based on (the prestigious annual and just-concluded show in ). We do not use a points-deduction system like those used by SCCA or CCCA in which the entered vehicle begins with 100 points and has points deducted for flaws that could include, for instance, a non-functioning gauge or a dirty undercarriage. However, for a car to do well at our show, it must meet a high level of originality and condition in the eyes of our class judges before it can be considered on the basis of elegance. Elegance is the final criterion when assessing cars against each other in a specific class.”
Spencer was born in , and went with his father to see Formula One races at legendary tracks like Silverstone, Goodwood and Brands Hatch .
He was drawn to SCCA activities in Northern California by friends and first judged an SCCA gathering 20 years ago in . In the San Francisco Bay Area he’s also been a judge at concours d’elegance events at , Hillsborough, ’s Presidio, ’s and in .
What are some of the glaring errors he’s seen on certain cars for showing? “They can be pretty severe – rust bubbling through, shoddy paint, reupholstered in the wrong material. Even had one chap try to register a grey market 1990s Mini Cooper into a class for 1958-75 British small sedans.”
He also operates Wheels, an agency providing picture vehicles for everything from print advertising and TV commercials to corporate gatherings.
The Marin event will include a display of vehicles honoring a century of two American icons – Chevrolet motor cars and the Indianapolis Motor Speedway. Among six Indy cars on view is the #17 rear-engined Cooper-Climax driven to 9th place in the 1961 race at the Brickyard by now-Sir Jack Brabham. The light and lithe little racer began a revolution at Indy and signaled the coming end of the classic front-engined Kurtis-Offy roadster. There are vintage wooden runabouts on view in the lagoon and there will be a special gathering of British car club vehicles in the car club corral.
The Marin Sonoma Concours d’Elegance is a non-profit fundraiser for Hospice By The Bay and also features “The Drive” a separate motoring event to benefit Hospice on Saturday, May 14.
General admission is $20 adults, free for children under 16 Hours are 10 a.m. – 4 p.m. For information, phone (415)479-7727 or download the event website, www.marinsonomaconcours.org.
Email Post