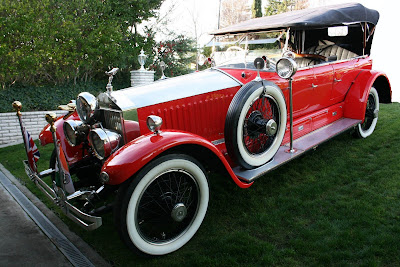 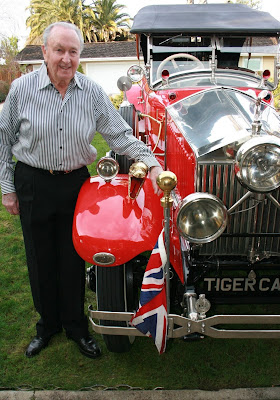 Easily one of the most opulent motor cars ever built – and this in 1925 for ’s Maharajah Bhupinder Singh --- a brilliant red and chrome Rolls-Royce Torpedo Tourer headlines a collection of stately Rolls-Royce motor cars at the 3rd Annual Marin Sonoma Concours d’Elegance, May 15, at the in .

Owned by Rubin Jurman, 83, , , the stunning Barker & Company, Ltd., Rolls-Royce was commissioned by King George V for the equivalent of $10,000 and sent shipboard to as a dedicated hunting car for Maharajah Singh (ruler 1900 – 1938). Singh’s vast estate dominated the marble-laden state of . His fully-staffed hunting retinues were legend.

An Empire-class cricketer, he owned the first airplane in , had more Rolls-Royce vehicles, sired 88 children and built large, modern buildings.

Jurman, a long-time classic car collector whose elegant vehicles have won top concours d’elegance honors at and at national Rolls-Royce showings, ticks off the stunning features of the immense vehicle – which literally bristles with firepower.

“This was his main hunting car,” he says, pointing to an unattached Gatling-type machine gun carriage that is towed. “And that was used for the Bengal Tigers.”

Reaching into the rear seating compartment, he notes, ”This is the Hoodah gun, which was a large-caliber, short-range firearm designed to repel any beasts likely to breach the interior. There’s a cannon on the rear bumper for elephants. Rifles are locked in vertical cases here in front of the rear compartment. There are bird guns and shotguns.”

Highlighting some unique styling cues in the rich coachwork, Jurman says, “The Torpedo model integrated nautical themes. Notice the gently rounded body sides, the pointed bow motif on the hood and the working nautical ventilators on the cowl. The vehicle is loaded with lights, including a single powerful central searchlight that swings side to side – and two front headlamps that move up and down. Same setup in the rear. When the Maharajah was aboard the red light was lit, when the Maharani was aboard, the blue light was lit and both were lit when both were aboard”

The 8-liter, six cylinder engine (horsepower in Rolls-Royce parlance then was “adequate”) has dual spark ignition. Tall tires are designed to cross rough terrain and the low gearing ratio allows the huge vehicle to creep through mud and brush. Jurman purchased the Barker model 10 years ago from professional golfer Gene Littler.

A member of the Rolls-Royce Club of America since 1971, Jurman’s collection currently includes the 1927 “Great Gatsby” Brewster model and a stately 1956 Silver Wraith limousine. A native of , he began his long affection for classic cars with a 1936 Packard Straight Eight.

In addition to the featured Rolls-Royce marque, the Marin event will showcase a lineup of cars celebrating two century anniversaries – the 100th year each for ’s Chevrolet and the celebrated Indianapolis Motor Speedway. Rare and rakish Stutz motor cars will be featured along with vintage motor homes and trailers, a special British car gathering and a showing of classic wooden runabouts in the site’s lagoon.