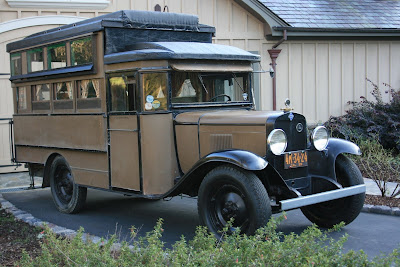 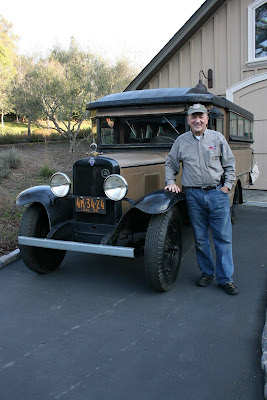 The last surviving 1929 Raise the Roof Chevrolet house car headlines a lineup of vintage trailers and early motorhomes on display at the 3rd Annual Marin Sonoma Concours d’Elegance, May 15, 2011, at the Marin Civic Center Fairgrounds in .

Built in Ontario, CA, by the Arthur A. Thompson Co, the fully appointed “Four Sleeper Family Coach and Diner” was one of four constructed on Chevrolet 1 ½ ton truck chassis and powered by Chevrolet’s first six-cylinder overhead valve engine.

Driven twice to Chicago and through the West by first owner George Wittenmyer (and sporting the 1929 travel stickers to prove it), the coach is fully equipped in its original condition, including a couch that converts to a bed, sink with hand pump, original Flame-O cooktop, water tanks, ice box, storage lockers, its original Paisley cloth roof liner, golden window shade tassels -- and a primitive toilet. The unrestored motorhome has rolled up more 37,000 miles.

The Raise the Roof is owned by enthusiast and collector Dick De Luna, Woodside, CA, who purchased the coach in 2005. This will be the vehicle’s first Concours d’Elegance showing.

DeLuna, 72, began his diverse and eclectic collection in 1980 with purchase of an MG from Harrah’s in Reno. The DeLuna motoring montage today includes a rare 1952 C-Type Jaguar, which raced at England’s Silverstone circuit, a unique late ‘40s Alfa-Romeo Grand Prix racer, an elegant 1936 Packard V12 convertible sedan and a re-created 1936 Dodge “woodie” Seabright Beach Lifeguard wagon (one capturing his affection for childhood summers at the Santa Cruz, CA, beach) and numerous hot rods and racing motors.

“I love my cars,” DeLuna says, “but all I am is a custodian. I want to get them out there where people can see and enjoy them – at showcase venues like the Marin Sonoma Concourse d’Elegance.”

An avid showman (he has won with his cars five times at the celebrated Pebble Beach Concourse d’Elegance), he is an active vintage car racer, having competed on tracks from England’s Goodwood Festival of Speed, in the recreated running of Mexico’s fabled Carrera Panamericana, on the Bonneville salt flats and at the Monterey Historics at Laguna Seca.

DeLuna grew up in Salinas, CA, and as a member of the local Road Knights hot rod club first raced a ’39 Chevy (with a hopped up GMC 270) at the Salinas Drag Strip. After college at Cal Poly, he served in the Peace Corps in and in 1974 began his collection and credit bureau business.

In addition to the vintage trailers and motorhomes, the Marin event will showcase a field of Rolls Royce and Stutz automobiles and in honor of two century milestones, there will be a decade by decade display of Chevrolet motor vehicles and rare 500 race cars, marking 100 years of competition at the Brickyard. Classic wooden runabouts will grace the site’s lagoon and there will be a special British car club gathering.

The Marin Sonoma Concours d’Elegance is a non-profit fundraiser to benefit Hospice By The Bay and will also include “The Drive,” a separate motoring event on Saturday, May 14, 2011 – another Hospice benefit. General admission is $20.