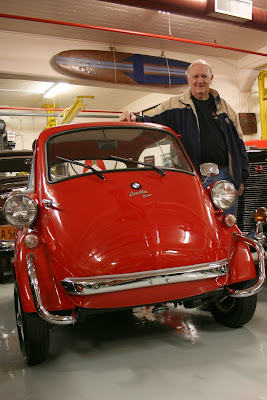 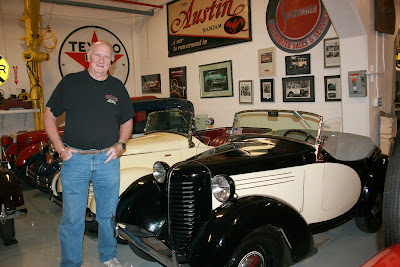 Automobile collector Al Engel, Pt. Richmond, CA, will show a number of rare Austin and American Bantam microcars (left) and his 1957 Isetta microcar (right) from his extensive collection of domestic and European motor cars at the Marin Sonoma Concours d’Elegance, to be held Sunday, May 15, 2011, at the Marin County Civic Center Fairgrounds in .

A rare showing of historic American Bantam coupes, sedans and Speedsters made in the ‘30s and early ‘40s, will be included among more than 175 elegant, classic motor cars on view in the 3rd Annual Marin Sonoma Councours d’Elegance, Sunday, May 15, 2011, at the Marin County Civic Center Fairgrounds in .

The Bantam contingent of early microcars is from the large motoring collection of enthusiast and historian Al Engel, Pt. Richmond, CA. Among Bantams on display is an extremely rare 1941 Boulevard Delivery.

Built first in , , as American Austins under license from ’s Sir Herbert Austin, the small vehicles – which were powered by a 15-hp four cylinder sidevalve engine – became American Bantams in 1935. Ironically, the company delivered the first specified working Jeep for Army review in 1940, but could not meet the government’s high quantity production qualifications.

“Gas was expensive in during the ‘50s,” Engel notes, “and manufacturers were looking – just like today – for small cars to fit the transportation needs of urban dwellers. BMW, which up to that point made motorcycles, saw the Isetta as a way to enter the automobile market. They bought Isetta licensing from Fiat and this is the vehicle that actually launched BMW as an auto manufacturer.”

A native, Engel, 67, was a car enthusiast in his youth but didn’t seriously begin collecting and showing classic motor cars until 1987 when he purchased an AC Cobra replica.

Rolls Royce is the featured marque at the Marin motoring event. Among early confirmations for Rolls Royce display is an opulent 1925 Phantom I open Torpedo Tourer built as a hunting car for Maharaja Bhupinder Singh. The vehicle is owned by Rubin and Arlene Jurman of .

Concours organizers will field a collection of 500 race and pace cars to celebrate a century of competition at the famed Brickyard – and will mark another centennial milestone with a decade-by-decade showing of Chevrolet motor vehicles. Vintage trailers, classic wooden runabouts (moored in the lagoon) and a special British car club gathering are among other features.

The Marin Sonoma Concours d’Elegance is a non-profit fundraiser to benefit Hospice by the Bay and will also include “The Drive,” a separate motoring event on Saturday, May 14, 2011 – another Hospice benefit.

For information, phone (415)479-7727 or view the event website, www.marinsonomaconcours.org.

Saiful Islam Patwary said…
I once have a vintage trailer in my collection and I gave it to the charity in last year. Thanks for sharing.
Motorcycle Trailers
October 20, 2016 at 6:12 AM