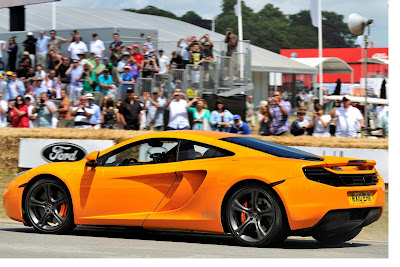 Have you got some spare change burning a hole in your pocket? I know just the thing to spend it on, the new McLaren MP4-12C, the new 2-seater from McLaren.

McLaren has built cars before; the fantastic F1 for one but the MP4-12C is their most ambitious project, and the most affordable to wear only the McLaren name. How affordable you ask? Prices haven't been set in stone yet but at a recent press event we were told that the price should be between $225,000 and $250,000. That's not cheap by any stretch of the imagination but compared to the $1,000,000 the F1 went for originally it's a steal.

Although McLaren is primarily an engineering company, and certainly the MP4-12C proves that, the design side has done a fabulous job. The MP4-12C is gorgeous. What amazed me more was all the engineering that was designed in, every square inch of the car has a purpose yet no where does style look compromised for function.

The driver and passenger sit inside a carbon fiber tub for safety, weight reduction, and rigidity. The front and rear sub-frames are aluminum. The suspension is race bred. The brakes? It wouldn't surprise me if people who first drive an MP4-12C end up stopping way short; the brakes look that massive and competent.

The mid-engine DOHC V8 is all McLaren, an amazing feat when you consider the cost of certifying an engine for multiple countries around the world. It is smallish at only 3.8-liters but the twin-turbocharged engine makes 592 bhp, and McLaren says it will make that amount in every market.

I asked about the viability of the engine with the ever tightening emissions standards. McLaren is justifiably proud of the fact that this engine is super clean and will meet the CO2 emission standards for the next five years at least- right now they are looking at less than 300 grams per kilometer. Based on the MP4-12C's low emissions and less than 2,866 lb. weight, I imagine this supercar will return super fuel economy if driven sensibly (yeah I know, define sensibly).

Performance figures are preliminary but extraordinary; 0 - 200 km/h (124.28 mph) below 10 seconds; 200 km/h - 0 below 5 seconds; maximum speed above 320 km/h (200 mph). I didn't get to drive the MP4-12C, this was a static display but given McLaren's history I fully expect these numbers to be equaled or exceeded by all production versions.

If you're tempted to buy a MP4-12C you better act fast. There are only going to be 1,000 available the first year, and only about a third of that in North America. (McLaren did say they expect a 4 or 5 year run.)

Right now McLaren expects to have 10 dealers in Canada and the United States. Potential San Francisco Bay Area buyers are lucky, there will be one dealer in the Bay Area. That one dealer will be in Palo Alto, CA in a dealership owned by the Price Family Dealerships. Tom Price, one of the owners, has been a Bay Area dealer for years and he is a certified car enthusiast.

I may never be able to afford a MP4-12C (unless I hit the lottery) but I know there are at least 333 people out there who can, and they should. If the F1 is any example, not only will the MP4-12C be one hell of a drive but it will be an investment.