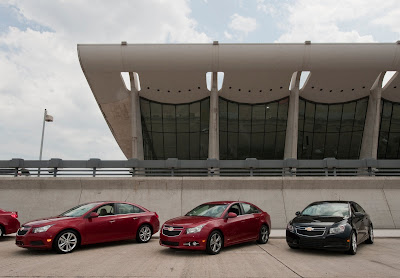 Today I got my first drive in a 2011 Chevrolet Cruz, Chevy's new import fighter. Not that the Chevy folks used that name today but where have we heard that before? Just about every new, small car from GM over the past 30 years has been an import fighter. Maybe this time they have it right.
To give you an idea of the size of the Cruz, a compact car, its stated competitors are the Ford Focus, Honda Civic, Hyundai Elantra, Nissan Sentra, and Toyota Corolla.
I'll tell you right off I don't like the name, Cruz. I don't know if it's a play on words (cruise) or a hint at a Spanish connection (Santa Cruz). How will the name play in Peoria?
But let's get down to the car. The Cruz seemed like a perfectly good car. Maybe a little underwhelming in the styling department (the result of clinics?). The interior is perhaps the high point, well laid out, high quality feel to the materials, and comfortable. Like most cars, it is labeled as a five-seater but in reality four will do better. Front seat leg room is extraordinary; with the seat all the way back on the passenger side my feet didn't reach the toe kick (I'm six foot). If the seat is all the way back, the rear seat passengers have almost zero legroom though. But just about the only people who will need that much legroom in the front will be NBA players.
Cruz has two engines available; a 1.8-liter 4-cylinder and a 1.4-liter turbo engine that has slightly better power figures and drastically better economy numbers. So I have to ask, why have two engines? You can have either a manual or automatic transmission, both with 6-speeds. It sounds like the manual will return slightly better economy and this goes against current wisdom. Chevy says the manual trans should be capable of just over 40-mpg.
I don't know what to make of Chevrolet's claim that "Cruz is backed by GM's five-year/100,000-mile powertrain warranty - the best coverage in America." Just off the top of my head (and I confirmed this) Hyundai & Kia have a 10-year/100,000-mile powertrain warranty and Suzuki has a 7-year/100,000-mile powertrain warranty. I don't know what hairs GM is splitting but you have to wonder.
I also question GM's pricing. The least expensive Cruz starts at $16,995 and the most expensive, the LTZ with the RS package is $23,390, all plus any options. The least expensive Corolla is $15,450, a Civic Sedan is $15,655, a Kia Forte $13,695. Admittedly these are 2010 prices and they may not be as well equipped as the Cruz but price does sell, or at least it gets the customer into the showroom.
I'll give Chevy the benefit of the doubt. The Cruz seems like a good car. Chevy seems to have a lot riding on it though, talking about selling everything the Lordstown, Ohio plant can crank out, probably just over 240,000 units. That's a lot of cars, especially a car with a name no one's heard before. We'll see how it does. For now though I'm giving it a tentative thumbs up. I wouldn't hesitate to buy one if I was in the market.
Email Post