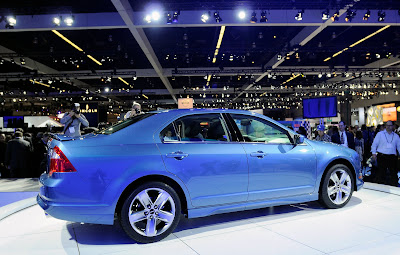 Ford has one hell of a designer in Freeman Thomas. I find his designs, or the designs he oversees, to be subtle, but intriguing. The Fusion, and it's been around for a few years now, just grew on me. Every time I looked at it I noticed something else, another line here or there that just had me go, "yeah."

It's kind of amazing that a four-door sedan can go from being a granny-car to a sports sedan.

Fit and finish, with one little exception, was superb. That one exception? At the right edge of the dash, where it meets the A-pillar cover, there was a little bit of insulation sticking up. How the heck that got missed at the end of the assembly line, or when the dealer did the pre-delivery inspection I'll never know.

There aren't too many cars that I can just get into and feel comfortable; the Fusion was one of those that just felt right. Don't know why.

Now I'm waiting for the SVT version with a 3.5-liter EcoBoost and AWD. Wow, would that be great or what?
Email Post