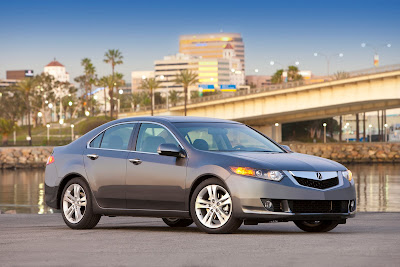 Acura is a bit of an enigma to me; it started out as the luxury division for corporate Honda. The Acura Legend became a legend. Initially there were two Acura models, the Legend and the Integra. Then Acura did something that startled the automotive world, they dropped all their model names and started using alpha designations. I think it started with the NSX, Acura's super sports car.

So now Acura has a RL, TL, TSX, ZDX, MDX, and RDX and I am eternally confused about their ranking. I am also not a fan of current Acura styling; I find it too angular. But when it comes to driving, well that's another story.

The last TSX I drove was a turbocharged four-cylinder. It was an excellent car. The V6 was even better. Acura makes some great engines and this 3.5-liter V6 is one of them. It is super smooth, powerful (280 hp) and economical (27 mpg highway).

The interior is well designed and functional. I liked the center stack - all the controls for the sound system, climate control, navigation system and information center. The only complaint I have is that it takes too long for the system to boot up every time you start the vehicle - it boots up, then you have to "agree" not to use it stupidly, and finally it is in a usable mode.

The TSX starts at $29,310 for the basic four-cylinder and tops at $37,950 for the V6 w/Technology Package. Almost forty grand is a lot of money, and you have to be okay with the exterior styling, but behind the wheel you don't see the outside and you do appreciate the real car.
Email Post