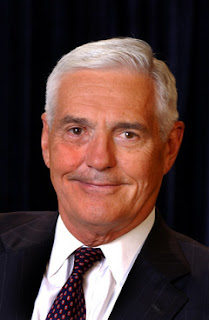 Did you catch Bob Lutz on Letterman last week? In my not so humble opinion he epitomized all that's wrong with GM and why they just don't get it.
Supposedly he was there to defend the Chevy Volt, the savior of GM that has been coming to market longer than we've been waiting for Godot. How anyone in their right mind can consider a car that according to Lutz will sell for around $40,000 (it started out so many years ago about $20,000) a savior?
And then there was Lutz talking about how things are so tough, what with salary cuts and reduced stock prices that he had to sell one of his toys - a freakin' fighter jet! Gosh Bob, I feel for you. Millions of Americans are losing their homes but poor Bob Lutz had to sell a jet fighter.
Lutz talked about all the great cars GM has in the pipeline. Like the Cruze, a rebadge Cobalt, which replaced the Cavalier. Do the brains at GM really think that by calling a Cobalt a Cruze sales will skyrocket? Listen, the Cobalt was a fine car, it didn't need a new name.
It's time for GM to take a broom to the executive floor. There are tens of thousands of GM employees who deserve better.
(The photo is the property of GM)
Email Post